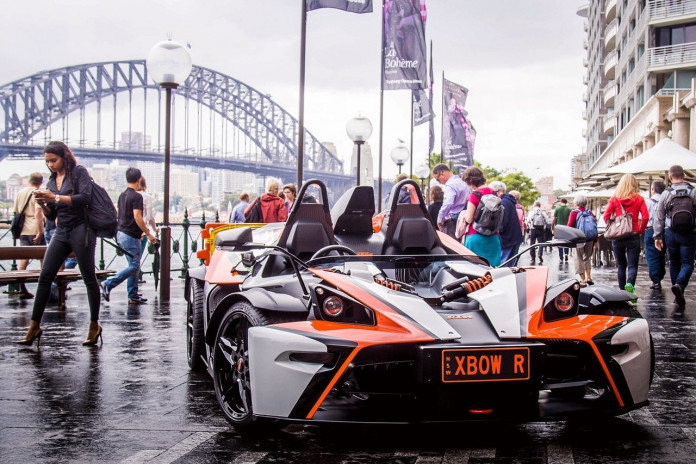 HAVE you ever thought about owning a legitimate street-legal open top super sports car? You know the kind of production car that sits on the world’s first full carbon fibre composite monocoque and weighs in at less than 800kg.

That set of wheels that drives like an open wheel racer but is built with ultimate safety in mind, capable of producing more than 100kg of down force at 200km/h – pulling 2G of lateral acceleration. Excited yet? Because we are.

Surprisingly well priced at $169,990 plus on-roads, the KTM X-Bow R (just like the one pictured here) is powered by an Audi 2.0L TFSI engine with direct injection, fitted with a turbo and charge cooling, allowing it to push out 220kW of power and 400Nm of torque, making it capable of 0-100km/h in 3.9 seconds. It’s even reasonably economical with fuel economy sitting at 8.9L/100km.

Not only are these cars nothing short of awesome to look at, and based on the specs mentioned above, wicked to drive, if you buy one, you get to participate in the Ultimate Track Tour. This astounding trip to Europe includes track time on the famous Green Hell (or the Nurburgring for those who prefer its traditional name), which measures more than 20km long and features 700 turns.

You’ll also enjoy some quality track time at Spa Francorchamps and participate in an X-Bow Battle Weekend (we’re talking one-make battle style racing here), as well as an exclusive tour of the KTM factory, before jumping into an X-Bow to hit the track at the legendary Red Bull Ring.

We’d buy one for this trip alone. The KTM X-Bow is sold exclusively in Australia by Simply Sports Cars at Artarmon in NSW, and by Motorline in Queensland.