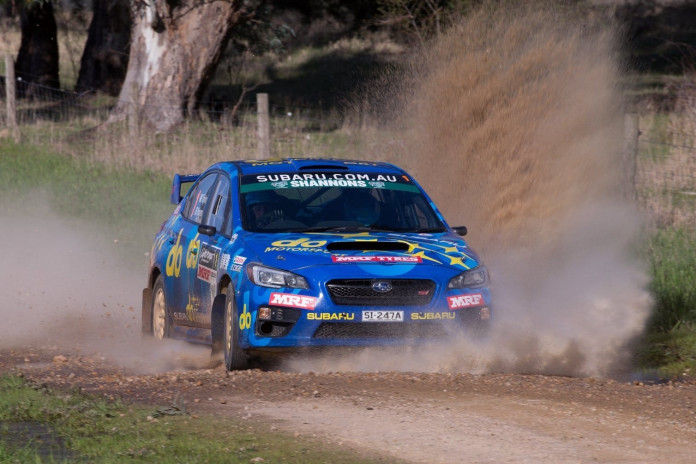 High hopes for the new Toyota Yaris AP4 of Harry Bates – who went into the event as leader of the CAMS Australian Rally Championship – proved fruitless. The Yaris failed to proceed on debut yesterday and quickly failed again today, on the first stage.

That left it a two-car tussle between the WRX STi and the Mitsubishi Lancer EVO IX of Nathan Quinn, who went on to secure wins in both heats.

Consistent second places across today’s six stages left the Subaru do team 46.7 seconds behind Quinn after 93.8 competitive kilometres on Heat Two, which included two runs through the weekend’s longest stages, the 19.65km Corryton Park 1 and 2 – plus the shortest, the 4.77km dirt and tarmac dash, SS13 Buddys.

“We’re in a much better position than we were at this time last year. The entire team has done a fantastic job over the weekend,” Taylor said.

“It’s all come together so well and now we need to maintain that going into the final round in Coffs Harbour. We all know what we need to do and hopefully, being on top of the championship will be all the inspiration we need to keep focused in Coffs.”

In the four night stages that completed yesterday’s Heat One, Taylor and Hayes proved their mettle with two stage wins. Overall second on Heat One was sufficient to raise the Subaru do points tally to Championship-leading status – a position strengthened by today’s Heat Two result.

The next and final round of the 2017 Australian Rally Championship is Kennards Hire Rally Australia, from November 16-19, at Coffs Harbour in NSW.