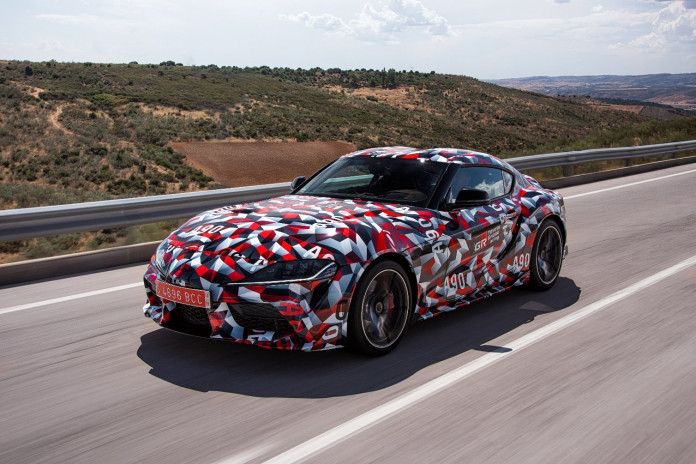 IF you’re like the rest of us, and you’re simply hanging out desperately for the launch of the new reborn Toyota Supra, you’re going to have to wait until quarter three (that’s July at the earliest) of next year.

Toyota Australia has today confirmed the long-awaited next generation of Toyota’s beloved sports car, the Supra, will be sold in Australia, and will be powered by a boosted 3.0-litre inline 6-cylinder engine.

The fifth-generation Supra, also known as the A90, will embrace the car’s impressive sports-car heritage and deliver pure driving pleasure with its front-engine/rear-wheel-drive architecture.

Boosted by a twin-scroll turbocharger, highly precise direct fuel-injection and variable valve control, engine outputs will be more than 220kW and 450Nm with a projected 0-100 km/h time of well under five seconds.

With a focus on performance and handling, the new Supra sports an extremely short wheelbase, low centre of gravity, high body rigidity and ideal 50-50 weight distribution.

It will also be the first vehicle sold in Australia to carry Toyota GAZOO Racing (TGR) branding, the global company’s new performance sub-brand.

“As the halo model for Toyota sports cars and our new GR brand, Supra points to a new-generation of driver-focused vehicles that will offer dynamic styling and faithful handling, even at the limits of performance,” Toyota Australia’s sales and marketing VP Sean Hanley said.

“These inherent qualities will also flow into our regular production models, enhancing Toyota’s DNA as a company committed to bringing the freedom, adventure and excitement of driving to everyone.”

The Supra legend began in 1978 with what was essentially a Celica with a six-cylinder engine. By 1987, it was no longer part of the Celica range and was equipped with a 3.0-litre turbo engine, upgraded to twin turbo in 1993.

The first public sign of a modern rebirth was the FT-1 Concept that made its debut at the 2014 Detroit Auto Show, previewing a possible rear-drive sports car.

While the FT-1 sports concept hinted at the styling direction, the new Supra also evokes previous legendary Toyota sports cars – such as the 2000GT and 80 Supra, for example, in the shape of the tail and the side windows.

Confirmation that Toyota was developing a new generation of the legendary sports car coincided with the unveiling of a one-off Toyota GR Supra Racing Concept at the Geneva motor show in March this year.

A camouflaged production version of the new model made its debut at the Goodwood Festival of Speed in July.

The production Supra, to be unveiled in the first half of 2019, will be built by manufacturer Magna Steyr in Graz, Austria.