The other 10 Bathurst winners 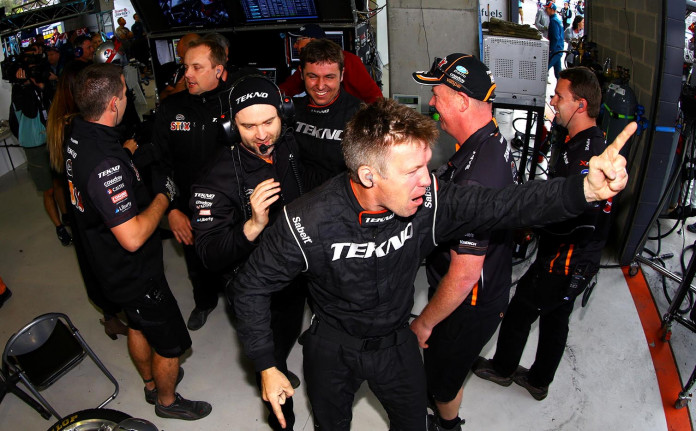 TEKNO Autosports achieved the Holy Grail of Australian motor sport yesterday, with Will Davison and Jonathon Webb taking out The Great Race (aka the Supercheap Auto Bathurst 1000).

The plucky little team made history, becoming the first to win both endurance events at the famed Mt Panorama circuit, having won the Bathurst 12 Hour in February with Webb, Shane van Gisbergen and Álvaro Parente.

It also became the first single-car outfit in 23 years to win the gruelling 161-lap race, a feat last achieved in 1993 by Larry Perkins and the late Gregg Hansford.

Ask any of the teams up and down the Virgin Australia Supercars pit lane, it’s no easy achievement, and while the accolades flow for the two drivers – it’s definitely a team effort.

“We bring away 10 people who work on the car. Each person has a role, each as important as everyone else,” crew chief Steve Greer told Exhaust Notes Australia.

While 10 people may sound like a lot compared to your local mechanic shop, in the scheme of Supercars land it’s one of the smallest crews in the game.

“Each person works physically harder than that of the bigger teams. That’s not to take away from other teams, but we have fewer people to do the same number of jobs,” Greer said.

Greer is responsible for keeping everyone on track – essentially he’s the operations manager within the garage.

On the tools, #1 mechanic Steve White, #2 mechanic Ben Lawrence and Alex Wilkinson are responsible for ensuring the #19 Darrell Lea STIX Commodore is running on song, while panel beater Andy Hackett keeps it looking its best.

Justin Pownell is responsible for all the sub-assembly within the team, the transaxles, rear hubs, etc. with Chris Byres as the damper specialist and tyres and logistics handled by truck driver Mick Shortus.

The number crunching and strategy is taken care of by engineer Dr Geoff Slater and data engineer Grant Howse. For Bathurst, the Tekno crew also had the support of Matt Wolfe for all the odds and ends that come up in a six-hour long race.

The garage is a tense environment. These guys live and breathe the sport. Emotions are running high, the stakes are massive and when it comes to Bathurst, it’s all multiplied.

Then, when there are 10 laps to go and you’re in with a shot at victory – it all spikes.

“Everyone in the team is different. Some are on edge 10 laps in,” Greer said. “I like to think I’m a realist and emotion won’t change anything. I don’t get nervous, but those final three laps yesterday I was.”

And who can blame him. Just two years ago, Tekno was in the box seat to clinch the race. Top 10 Shootout specialist van Gisbergen took out pole position and he and Webb led for more than a quarter of the race.

The strategy was perfect but a tiny error from van Gisbergen on the final stop of the day saw him stall and the car wouldn’t re-fire. At that moment, a near certain win was ripped from underneath them from a minor part failure.

As the laps ticked down in the 54th instalment of the Bathurst 1000, team owner Webb wasn’t seen in the garage. Instead, he was out the back with wife Kobe and son Judd – trying to distract himself while van Gisbergen closed in.

If anyone knew how tough it would be to hold off van Gisbergen, it was the Tekno team – having had the Kiwi race there for two seasons prior.

“We knew van Gisbergen would give it a red hot go. He was always going to make us work for the position,” Greer added.

The Bathurst win couldn’t have come at a better time for Tekno. This year saw Davison step into the seat after van Gisbergen defected to Red Bull Racing Australia, but it also saw the departure of the highly experienced Steve Hallam.

Despite the major changes, it proves Tekno is still a serious contender. While the #19 Commodore is built by Triple Eight Race Engineering, it’s not identical to the two at Red Bull Racing Australia or the car on the Team Vortex side of the garage.

Tekno was an underdog yesterday. It was taking on it’s much bigger and resourced counterpart in Triple Eight – and beating the six time winners is a major coup.

“The effect that winning Bathurst has on team morale is indescribable,” Greer said. “You can hold a barbecue for team bonding, but nothing compares to the huge boost you get winning at Mt Panorama. It’s like nothing else you will ever do and for a small team like us, it’s huge.”