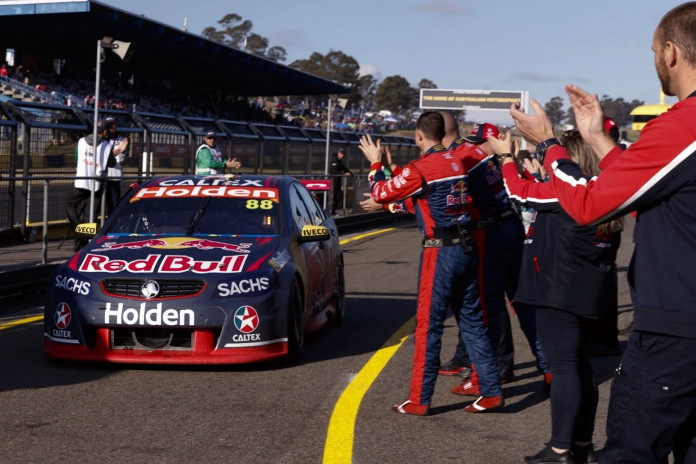 JAMIE Whincup’s Virgin Australia Supercars Championship win on the weekend didn’t just break the all-time race victory record, but also created a new champion of the cars with Holden’s VF Commodore becoming the most successful model in the sport’s history.

Whincup claimed his 106th career win to eclipse teammate Craig Lowndes’ tally of 105, bumping VF up to 104 race victories in the process.

The VF Commodore was introduced to the series at the start of the Car of the Future era, making its debut at the Clipsal 500 in 2013 where it claimed its first three victories courtesy of Craig Lowndes, Shane van Gisbergen and Fabian Coulthard.

Since then, nearly all of Holden’s teams have celebrated success in the VF, with Brad Jones Racing, TEKNO Autosports, Triple Eight, Walkinshaw Racing (formerly the Holden Racing Team), Garry Rogers Motorsport and Lucas Dumbrell Motorsport all taking at least one victory with the car.

Second on the leader board is Holden’s VE/VEII Commodore with 103 win during its service period from 2007-2012 while the VT is the brand’s third most winning model with 63. Ford gets its first mention for the FG model which had 55 wins.

While a new Commodore lands next year when the  ZB model makes its debut, the VF’s life in Supercars could stretch beyond 2017 alongside the incoming model. Factory squad Red Bull Holden Racing will lead the charge with the new Commodore, but not all teams within the Lion’s den have confirmed they will make the transition to the ZB right away.

Proud of its ongoing motor sport heritage, Holden and its Holden Motorsport arm already has another milestone in its sights, with the Commodore nameplate approaching 500 victories in the sport – it’s currently on 476.