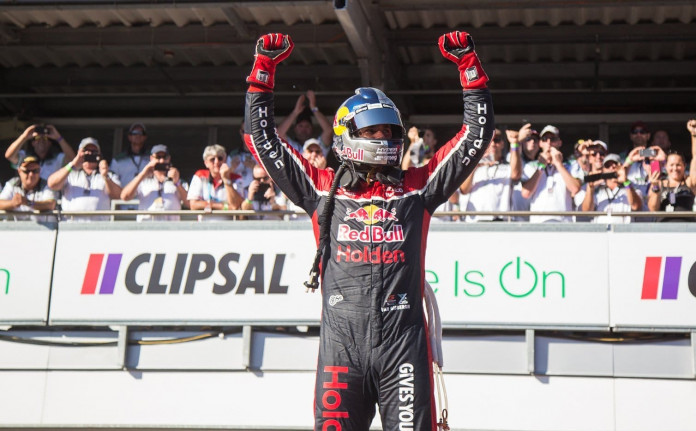 “It was a very hard day, but such an awesome result. The car is really good, it held up well, and once I got clean air towards the end I had a huge amount of pace,” he said.

“I learned a lot about the tyre, how it goes in the heat and how it performs.

“Physically, it was a massive race. I’m stoked for the team to get this win, we’ve all worked so hard over the off-season and so to get to this point and kick off the season on a high note is an awesome success.”

“I was good driving, but as soon as we stopped it hit me. Anything over 18 degrees I feel it,” he joked.

Meanwhile the champ’s teammate Whincup starts the year with a blotted record, with a post-race investigation underway for contact he made on Mark Winterbottom in the middle of the race.

It will also be a tense evening in the Brad Jones Racing camp after new recruit Nick Percat made contact with teammate Tim Slade, forcing him to the pits for repairs and costing him a potential top 10. Percat was not penalised and finished seventh.

With temperatures throughout the day soaring, the drivers were all worse for wear, but cool suit failure for Taz Douglas saw him out of the car and in an ice bath mid-race, before jumping back in to finish 24th.

Tomorrow sees another 20-minute qualifying session, Top 10 Shootout and 78-lap race to decide who is crowned the Clipsal 500 Champion.