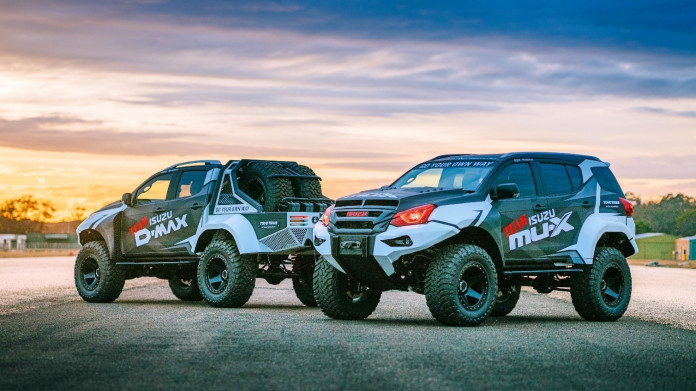 Team D-MAX lead driver Jack Monkhouse says it was the tyres that got the project started. “We saw a set of gigantic tyres on the Toyo Tyres stand, and our boss, Wayne [Boatwright] joked about putting them on his company car.”

That was the light-bulb moment that set Team D-MAX on a mission to build the ultimate double act. The boss, Wayne Boatright, says the project got a bit out of control, but once they’d started, they were determined to make them unique.

“We didn’t set out to build a racer or pre-runner or rock crawler, or yet another version of the ultimate 4WD tourer,” he said.

“It would have been easy to bolt on many accessories but we wanted to go our own way, so most of the build; the guards, bull bars, bonnet, brakes, suspension and chassis modifications are all in-house custom work.”

Combining form with function, the D-MAX’s full-alloy tray is a work of art, that neatly and securely transports four pressed steel diesel fuel cans and two full-size spares. Beneath the tray, the standard rear leaf spring suspension set-up has been replaced with a custom MU-X style 5-link coil spring configuration.

With the big tyres and another 7-inches of suspension lift, the approach and departure angles steepen impressively to 50 degrees and 38 degrees respectively.

While the exhaust systems have received a slight tweak, the Concept X vehicles are still powered by unmodified versions of Isuzu’s legendary 4JJ1-TC 3-litre diesel engine and 6-speed automatic transmissions, while the interior incorporates the premium styling and features of the LS-T model D-MAX and MU-X.

With a reputation for putting vehicles through the ringer with their spectacular driving displays, Team D-MAX ranks the Isuzu UTEs as the most reliable vehicle the team has driven.

“We’ve used different vehicle brands throughout the team’s history, but Isuzu UTEs truck DNA sets them apart from the rest,” Boatright says. “Their diesel engines are simply the best in the business, and the whole package has been outstanding concerning reliability.”

While not destined for showrooms, the public has had the chance to see the Concept X D-MAX and MU-X in the metal at the National 4×4 Outdoors Show, Fishing & Boating Expo, Melbourne Showground over the last few days.

The vehicles will now tour a host of 4WD shows and other events around the country over the next year.