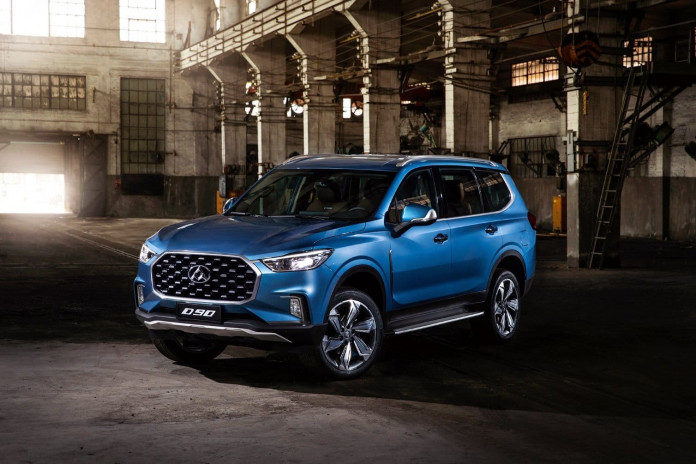 CHINESE car maker LDV is set to launch a large seven seat SUV onto the Australian car market in mid-November, and Exhuast Notes Australia has not only seen it, but we’ve touched it, sat in it, and generally climbed all over it.

Revealed at yesterday’s Australian launch of the T60 ute, LDV has showcased the final pre-production version of its new full-size seven seat SUV, the D90, set to make its local debut in mid-November, packed with technology and a long list of luxury features aimed at providing comfort and convenience.

Imported into Australia by partner distributor ATECO, the D90, which was developed with the assistance of General Motors and has gained local specifications along the way, joins a range of vans and the new ute platform and as stage one of a significant growth strategy by LDV and its parent company Shanghai Automobile and Industrial Corporation (SAIC).

Exhaust Notes Australia were given a sneak peek of the final pre-production version of the mid-range variant, with some top of the line add-ons, which features leather seats, a 12-inch touch screen infotainment system, woodgrain and cushioned interior, auto tailgate, panoramic glass roof, and handle releases in the boot area to lower the centre row of seats in this large seven seater.

Like the T60, everything about this vehicle is solid. We were seriously impressed by the leather seating (which someone remarked would rival fellow ATECO brand Maserati), the spaciousness and the overall look and feel of the D90. It also comes with the same five year warranty package as the T60 (including 10 year rust and corrosion protection, roadside assist and a loan vehicle).

“LDV clearly know that while the SUV sector is now the dominant vehicle type around the world, it is also highly competitive,” LDV General Manager Dinesh Chinnappa said.

The big family SUV, which boasts a 2.3 cubic metre load space when the seats are laid flat, also comes with some interesting features, including automatic road sign recognition, and a driver’s seat that is not only heated and cooled, but offers a massage.

Power comes from a turbocharged petrol engine that produces 165kW of power and 350Nm of torque at a low of 2,500rpm and a peak of 3,500rpm, providing a flat curve that should mean it maintains good drive despite lower power levels than its competitors.

Gearboxes across the two wheel drive and four wheel drive range are all six speed electronically controlled automatics, all fitted with terrain selection and an electronic rear differential lock. Fuel economy sits at 10.2l/100km for the 2WD variant and 10.9l/100km for the 4WD.

Adaptive cruise control, puddle lights under each door, ambient lighting inside, and you can even plug in mains powered equipment with the 220 volt/150W power socket in the rear of the vehicle. A host of USB ports are also scattered throughout.

A diesel version is expected within 18 months. Pricing for the LDV D90 will be announced at the launch on 15 November.