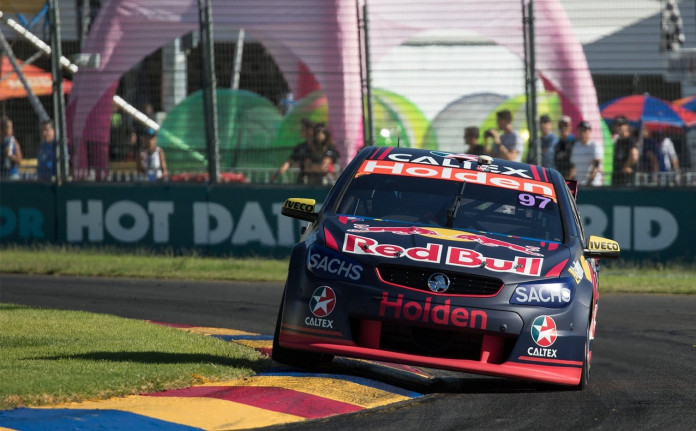 Reigning champion Shane van Gisbergen starts the 2017 Supercars championship as the one to catch after topping the first qualifying session of the year ahead of the opening Clipsal 500 race in Adelaide.

“I’m pretty glad I went to the toilet before qualifying,” van Gisbergen joked.

“It feels really good to be up here. The car didn’t feel great this morning. I was fast but we didn’t have any balance. Now it’s fast and comfortable.”

“It’s much better to have a year under my belt. Last year I was still learning people’s names so it makes [McLaughlin]’s performance even more impressive. He’s going to be tough to beat later in the year.”

It was the most minute margin separating the Red Bull Holden driver and second placed Scott McLaughlin in his first appearance at DJR Team Penske – van Gisbergen’s time of 1:19.7806s just 0.0001s better than his fellow countryman.

McLaughlin said the attention on DJR Team Penske following his arrival and their high-profile engineering recruit Ludo Lacroix, who came from Triple Eight Engineering, has been a surprise.

“It’s interesting that people are worried about us. We’ve got a lot to do to be consistent,” McLaughlin said.

“It’s a testament to our sport. We’ve got the toughest touring car category in the world and that qualifying session shows it.”

Tomorrow’s Top 10 Shootout takes place at 12:00pm Adelaide time with the first of two 78-lap races for the weekend from 3:20pm.