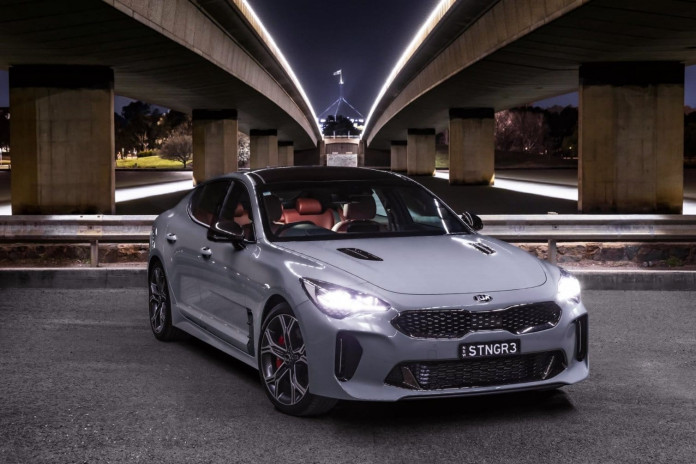 IT germinated from a seed of desire planted by the classic gran turismo cars of the sixties and seventies, and now, from today, Kia’s stunning new Stinger is set to bloom like a wild flower on Australian roads.

A powerful fastback sports sedan, the 2018 Kia Stinger closely follows the design and engineering blueprint laid down by the 2011 Kia GT Concept, and is the highest-performance production vehicle in the company’s history.

It channels the spirit of historic grand tourers – powerful, elegant vehicles capable of moving their owners in style, at speed. At every stage of development, the Stinger has been designed and engineered to be the perfect gran turismo.

“It is styled to catch the eye and the heart, it is powered for a big country and tuned and balanced to provide the sort of easy long-distance performance that Australian drivers have come to expect from their family cars,” Kia Motors Australia Chief Operating Officer Damien Meredith said.

“All-in-all the Stinger answers a host of questions that a significant section of the Australian new car buyers have been left wondering about.”

In its transition from concept to production, Kia’s GT Concept was renamed ‘Stinger’, inspired by the GT4 Stinger concept revealed at NAIAS 2014. While the car is a true GT in nature, the Stinger name evokes speed and excitement, two key characteristics found in the production car.

For Australian buyers the Stinger will come with a choice of two petrol engines – a single turbo 2.0-litre four cylinder (182kW and 353Nm), to be known as the 200 series, or a twin-turbo 3.3-litre V6 (272kW and 510Nm), which will carry the 330 moniker, both driving the rear wheels through Kia’s in-house eight-speed automatic.

Each of the engine grades will be available in three specifications – S, Si and GT-Line for the 2.0-litre and S, Si and GT for the 3.3-litre and below you’ll find a run down of what those packages look like.

On the comfort and convenience front the Si gains advanced smart cruise control, while in line with the S there are four cup holders and four bottle holders, a centre console storage box and front seat pockets but the Si adds a handy luggage net.

At the top of the grade the GT is the pinnacle model, and is packed with extra features. In addition to the rear view camera the GT adds a 360-degree camera view, blind spot detection, dynamic bending lights, high beam assist and a heads up display (HUD).

There are also a range of external cues unique to the GT, including electrochromic door mirrors, LED headlights with auto levelling, powered sunroof and two bespoke colours – Aurora Black and Snow White Pearl.

The seating becomes Nappa leather appointed with GT logos and the addition of lumbar support, powered bolster adjuster and thigh extender. There is a two-position seat memory with easy access and a D-cut steering wheel.

The instrument cluster steps up to a 7-inch colour TFT-LCD screen, alloy sports pedals become standard and suede makes an appearance in the interior roof and pillar trims. There is also a wireless phone charging capability.

Specific to the 3.3-litre cars are a set of Bembro brakes and a limited slip differential as well as variable gear steering ratio – all designed to make the big Stinger as sporting as it is enjoyable.