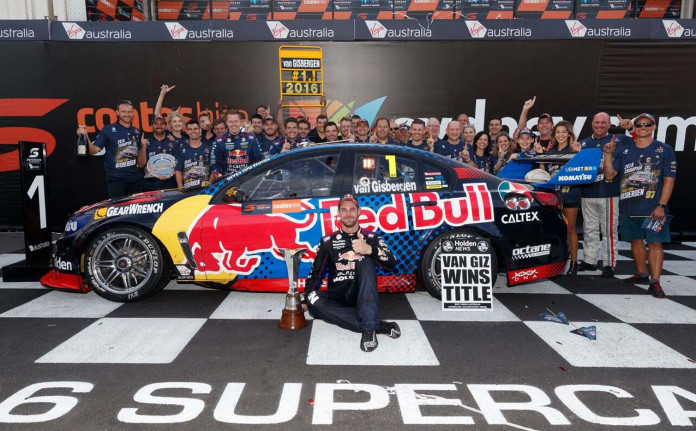 IN 2010, Shane van Gisbergen was denied his maiden V8 Supercars win when his then Stone Brothers Racing Falcon ran out of fuel coming onto the main straight.

Six years later, that same straight has been branded in the Kiwi’s own way – two smoking rubber matchsticks from the most spectacular victory burnout since Russell Ingall won the 2005 title.

It’s the last Supercars burnout the streets of Homebush will ever see – and even if it wasn’t, Exhaust Notes Australia doubts whether anyone could ever beat it. Van Gisbergen led home Holden Racing Team’s Garth Tander, with the final podium spot an unexpected result for most, filled by Erebus Motorsport’s David Reynolds.

“I’ve won this race the last three years and never been allowed to do a burnout. I think I made up for it,” van Gisbergen said. “It was pretty cool to nudge up against the wall in front of the boys.”

Van Gisbergen’s victory wasn’t without controversy though, with the champ making contact with Tander when he was released in pit lane.

“There was contact, but apparently you can do that now,” Tander said. “The rule used to be if you impede a car in the fast lane you get a penalty.”

Reynolds denied Whincup one last podium for the year, giving Erebus its best results since moving to Commodores this year.

Attention is now on where Tander will be in 2017, but he as adamant he will be in Supercars and a potential front-runner.

“I expected if we can put the deal together I am working on, we can be a contender and I’ll have a crack at the championship,” Tander said.

Supercars returns in 2017 with the season opener at the Clipsal 500 in March, but many drivers will take part in February’s Bathurst 12 Hour.