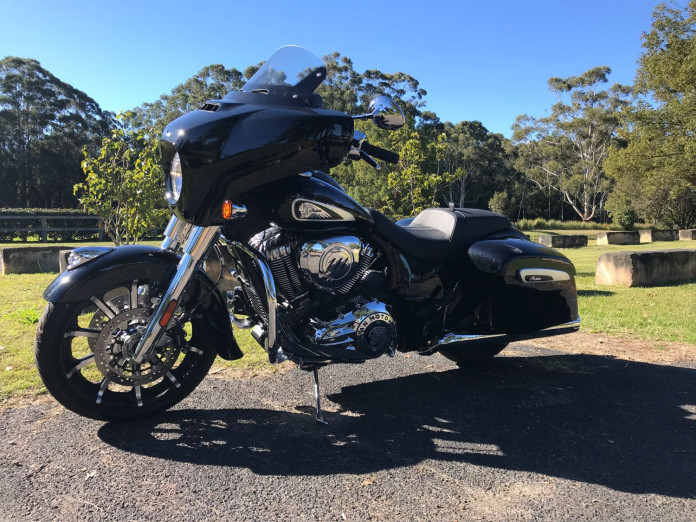 ONE of the great icons in the motorcycling universe is the legend that is Indian. From the attention to detail, performance, and state-of-the-art tech to the sublime ride, the wickedly cool 2019 Chieftain Limited continues that iconic tradition.

It’s hard to go past the black paint and chrome on this classic cruiser, it’s a look that never misses the mark. There’s accents and stylish touches everywhere, from the Indian head riding light on the swooping front fender to the retro heads on the chromed motor.

The inspired Indian logos on the derby cover and fuel tank are just more proof that the 2019 Chieftain Limited pays significant homage to its roots. But like all good things in the modern world, it’s the art of integration that’s the key.

It’s how you tie new to old without detracting from the classic cruiser history of a brand such as Indian, and this is where the Chieftain shines. The nicely shielded touchscreen infotainment system has got it all.

Here you’ll find everything from SatNav, Bluetooth, an electronic speedo, fuel gauge (including range to empty), tyre pressure monitoring and the gear indicator. It can even direct you to the nearest service station when the fuel light comes on.

And yes we really did say touchscreen. It even works while wearing riding gloves. There was no repeat tapping to prompt commands, and the touchscreen display was large and remarkably easy to operate.

The stereo system offered great sound and the automatic surrounding settings (which raise and lower the volume to compensate for riding noise) worked a treat. It even lowers the volume to a respectable level when you pull up at traffic lights.

Before we forget, we should mention the electronic windshield that can be moved up and down at a touch of a button. It’s another nice touch that illustrates the combination of the best of retro and modern and how Indian has integrated the two seamlessly.

Seat height is set at 650mm, offering a great riding position that’s supportive and comfortable for long haul journeys, while putting the rider in a good position to negotiate bends, as well as the rigors of city traffic.

With a dry weight of 361kg the 2019 Indian Cheiftain Limited is a big bike, but it doesn’t feel that way, especially when you stretch its legs. We were blessed with a perfect day for riding while we had our test bike, and it was an absolutely glorious experience.

As we punted the big Chieftain through Yarramalong on the Central Coast, the bike felt nimble and responsive. Entering each corner we wanted to push the bike a little harder each time. It felt great and as surefooted as a mountain goat.

It’s a downright grin inducing experience, and with 130mm of ground clearance it was easy to enjoy the lean angles offered by the Chieftain as we flicked it through the corners.  Our test bike was fitted with some aftermarket pipes too.

That exhaust note was supreme and provided the perfect soundtrack for a Sunday ride, with the performance of the Thunder Stroke 111 V-Twin motor enough to make a practicing priest to reconsider his faith.

The responsiveness from the throttle was excellent and adds nicely to the dynamic handling of the 2019 Indian Chieftain Limited. It makes for a great overall riding experience, and one that seriously ups the ante on what to expect from a classic cruiser.

On the fuel front, 20.8-litres was the magic number for fuel tank capacity, or roughly 300km, depending on how aggressive your riding style is, and the  conditions you are riding in.

In fairness, it is also worth mentioning that our test bike had just a few hundred kilometres on it, and we would expect the fuel economy to improve as the motor was fully run in.

There are accessories aplenty too, should you invest in a Chieftain Limited, as well as a good selection of colours, including Ruby Metallic and Dark Walnut, along with the Dark Horse variant that features Matte Black paint.

There are sissy bars available as well, which lots of buyers will appreciate when touring with a loved ones, as well as pipes (like the ones we had) and engine upgrade kits. It’s not a cheap bike to buy though.

Starting at $38,995 plus on-roads, it’s up against the likes of the Harley-Davidson Street Glide Special and Road Glide Special. While it’s certainly not at the bottom of the pricing scale, its rivals are in the same price bracket.

Ride On: 2019 Indian Chieftain Limited<strong>Pros -</strong> standard performance of the 111-cubic inch motor; the 19-inch wheels; tech functionality is excellent; overall bike design.<br> <strong>Cons -</strong> slightly smaller fuel tank than its competitors, for a bike in this price bracket it should have heated grips as standard.