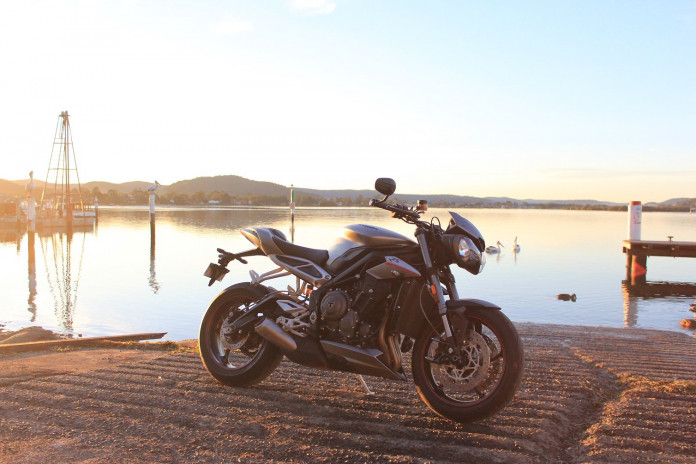 JUST on 10 years ago, powerhouse bike brand Triumph graced us with a then little known bike called the Street Triple. But in 2017, the company has torn up the rule book, and set a whole new standard for explosive, adrenaline pumping sports bikes, with the introduction of the all new RS.

Equally at home on the track or the road, the Street Triple RS runs a redesigned, completely insane 765cc liquid cooled 12-valve 90kW engine that features more than 80 new parts, including an increased bore and stroke, new crank, pistons and Nikasil-plated aluminium barrels.

At 100km/h on the highway in sixth gear it tingles along at 5000 rpm, so overtaking vehicles is a simple roll of the throttle. Knock it down a couple of gears and it will overtake in the blink of an eye. It also has an awesome growl, although it won’t offend other road users as most of the noise is induction roar which seems directed at the rider.

Delivering the power needs some electronic magic, and this has been achieved by sending a fleet of electronic engineers to Hogwarts School of Witchcraft and Wizardry.

The Street Triple RS has had the volume turned up thanks to a suite of electronic aids and variable settings riders can customise via a comprehensive on-board computer and instrument screen. All features can be accessed via controls on the left switch block and you can even change the way the instruments look with a bigger speed indicator or rev counter.

The extent of the cleverness and wizardry doesn’t end there, some of the most useful features include hand-adjustable full-colour 5-inch TFT instruments that tilt so you can see them clearly without getting sun glare. Another interesting feature is being able to switch off the headlights, leaving on the bright LED daytime running lights.

There are five riding modes – Rider (which is programmable to your favourite settings and selectable from the menu), Rain, Road, Sport and Track, all accessible by the left switch block. Tailoring the RS is very simple and highly exhilarating knowing that you can play and mould the RS to your personal preferences.

We played around with the bike settings, which can only be adjusted when stationary, and around town we dialled in the rain mode, left on all the aids and softened the brake response. It then became a tame and civilised commuter with a smooth throttle response and strong brakes with plenty of feel.

In traffic, it flicks around lightly and is highly manoeuvrable, feels sure and steady. The all new ride-by-wire throttle on each of the new model delivers a crisper, more precise and more accurate throttle response. Modes set different limitations for throttle map (Road, Rain, or Sport), Continental ABS (Road or Track), and Triumph Traction Control (Road, Rain, Sport, or Track).

And you have control of the options; the ABS and traction control can be switched off, right from the dashboard. When you head for the hills and dial in the full power, it becomes super-sensitive and highly responsive.

The transmission has shorter first and second gears for increased acceleration, but you can also quickly flick through the gears, thanks to the super-light clutch. When you’re stuck in the daily grind, that flexibility is handy.

The RS also gets a quick shifter, allowing clutchless upshifts up to 2.5 times quicker than manual shifting, which is great for the track, but also handy for quick changes when needed in traffic. So while this might appear to be a canyon carver and track weapon, there is enough flexibility to make the bike behave how you want it to.

The riding position is aggressive without being uncomfortable. Rather than crouching and reaching for the bars, you are tilted toward the bars. The seat is flat and firm, but it doesn’t become uncomfortable with time in the saddle. There is also a decent reach to the foot pegs so you don’t have to be a flexible gymnast to ride the bike.

Among the few downsides the Street Triple RS has, the attractive bar-end mirrors are a bit wide for lane filtering, and because of the engine buzz, they are often blurred.

The RS also comes with fully adjustable Showa big-piston forks and Öhlins STX40 fully adjustable rear mono-shock, which are firm but sort out the sharper bumps. The brakes are outstanding, with Brembo M50 four-piston radial mono-block calipers up front, and a Brembo single-piston sliding caliper out back.

Because of that, it stops on a dime and the rubber your riding on is the brand new Pirelli Diablo Supercorsa SP tyres, which are grippy like velcro, providing plenty of confidence on a dry road and solid support in the wet.

There is a range of more than 60 accessories that includes protection, styling equipment, Arrow exhausts and adjustable brake and clutch levers. Colours available are Matt Silver Ice and Phantom Black (Metallic) – The RS has a colour-coded belly pan and colour-coded pillion seat cowl with interchangeable seat with detailed stitching, and a lower chain guard.

Overall the levels of agility, friendliness and an astounding electronics package make this a great motorcycle for any rider.  Just a few minutes of riding the Triumph Street Triple RS confirmed that this is more of a track-derived sports bike than a road rider but that’s a good thing.

Its performance, visual improvements and handling make it, in our view, the best and most exciting Street Triple in the model’s history. Triumph’s goals with the Street Triple RS were to offer a motorcycle that’s got power, performance and is light-weight to provide real ease of handling.

They wanted to ensure there’s that styling attitude that gives it a street fighter design. It’s obvious from our time with the 2017 Street Triple RS that their goals have been met, but at the same time, you seriously have to dial in your brain because the RS is quicker to respond than you are. Trust us. The Street Triple RS will set you back around $19,000 ride-away.