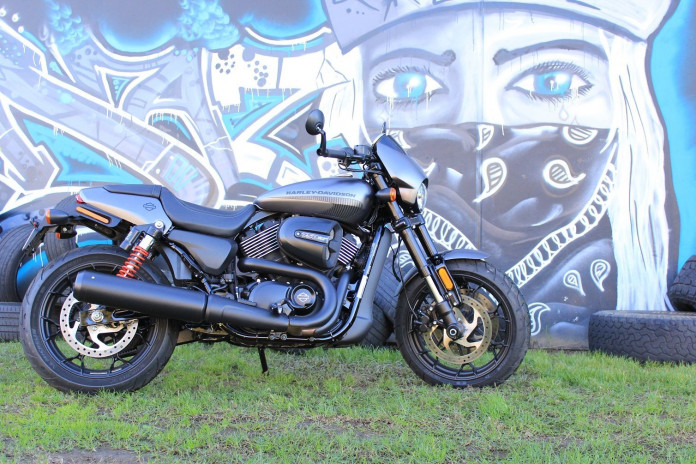 THEY’VE been mixing things up for a while now over at Harley-Davidson, making changes to their range of bikes to attract younger, more sports bike oriented buyers, to their machinery. That’s meant Harley-Davidson has been busy, creating more than 30 models to choose from.

That creates a conundrum though, because choosing your desired Harley-Davidson has become a really hard decision. But the introduction of the 2017 Street Rod 750 may have solved that issue, particularly if you are keen for an alternative to a sports bike that looks the goods.

The Street Rod 750 takes it inspiration from the drag style bikes in the range, such as the V-Rod and Night Rod, and it packs aggressiveness you can smell. Its added visual bite comes from a new stubbier, taller frame, and its pass through the Harley-Davidson’s Dark Customs styling studio.

The Street Rod has been given a liberal covering of matte paint work, new split-spoke 17-inch wheels, and an intake scoop which draws inspiration from forced induction hot rods from 30-plus years ago. The tank is also in a new position, adding to the bike’s presence.

The ground clearance is up too, shifting to 193mm from 145mm and the swing-arm mounting point is new, shortening the wheelbase by 10mm to 1510mm, over the Street 500.

While it gets a shorter sub-frame, where the Street Rod really differentiates itself from the Street 500 is in its beefy 43mm inverted forks at the front, while the twin rear shocks now get piggyback reservoirs for improved damping, in order to maximise cornering performance.

Harley-Davidson has also upgraded the tyres to radials, which are now sized at 120/70 R17 (front) and 160/60 R17 (rear). The foot pegs too are more rear-set, and this means you won’t have to worry about scraping them when going around bends, however the foot controls left us a bit, um, wondering what happened.

In what is probably the biggest complaint about the bike, when stopping and putting your feet down, the foot pegs would bite into your shins. We were left having to put our legs further back to avoid the pegs.

But there are in fact other improvements all over the place. Even the brakes have seen an immense upgrade thanks to the dual 300mm rotors up front, with two piston calipers, as opposed to the single disc on the Street 500. The rear brake stays the same with a single 300mm disc with twin pot calipers.

However, Harley-Davidson is offering ABS as standard on the Street Rod, which should really help increase safety to offset the boost in performance. The stopping power is strong and confidence inspiring.

In terms of what it packs “under the hood”, the Street Rod 750 stows away a single overhead cam four valve 750cc ‘Revolution X’ 60 degree V-twin liquid-cooled engine, which has received some attention from Harley-Davidson to boost it up even further.

Power is 20 per cent more, at 51kW, with 10 per cent additional torque, now up to 64Nm. The source of this new found oomph is the 42mm throttle body and new high-flow cylinder heads containing new high-lift cams with longer duration, plus a shorter two-into-one exhaust. However, at 238kg ‘in running order’, it does weigh more than the 233kg Street 500.

To give you a little background on the liquid-cooled 60-degree V-twin, it is similar to the Revolution engine we first saw in the V-Rod back in 2001 with a different twist. The Revolution engine was developed with the help of Porsche’s Engineering Group in Dusseldorf, Germany and wasn’t approved by the engineers until it successfully reached 500 hours of non-stop run time.

It’s got plenty of punch, with power from the moment the throttle is opened to about 5,000rpm, with peak torque hitting at 4,000rpm. The motor is happy to keep pulling while it lazily revs higher, albeit with some hints of torque strain. As a result of this characteristic, we were rarely inclined to go much beyond 7,000 revs.

With the revs around 4,000-5,000rpm though, making progress on a twisty bit of road is a pleasurable experience, because there’s always plenty of shove at hand to punt you out of a corner.

On the down side, the Street Rod’s frequent inability at finding neutral was a bit frustrating. There is a display to show you when neutral is found, but finding it easily was not happening they way you would like it too.

All-in-all though, the Street Rod brings the 750 platform into relevance. It is the kick in the arse within that specific market that Harley-Davidson has delivered, and delivered well. It’s more aggressive, higher-revving, and more forward-thinking than any production bike we have seen from Harley-Davidson in decades, they just need to fix the ergonomics and the heat issue.