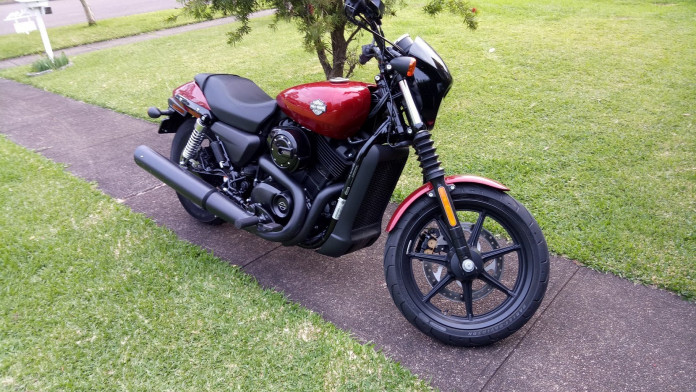 WHEN you say Harley-Davidson, you automatically think of big burly blokes on big LOUD bikes, that are as intimidating as they are beautiful (the bikes we mean). It is rare to see a Harley-Davidson that isn’t pristine and gleaming in the sun and that’s because Harley-Davidson riders are very particular about their rides.

Rarer still is to see a Harley-Davidson rider under 25, but that fact is changing, and changing rapidly, because the Street 500 is learner-legal. The liquid-cooled Revolution X V-Twin encapsulates all that is Harley-Davidson, while catering for that person who has decided to get a bike licence, but also wants to own a special bike, from a special brand.

If you’ve always loved the thought of owning a Harley-Davidson, had pictures of them on your bedroom walls and got excited when you heard a group of them coming up the road, you can now own one for under $10,000 (plus on road costs).

It’s not really for the experienced rider who is looking for more grunt and speed, but even at speed, the Street 500 doesn’t struggle, and feels solid and poised. That said, there is nothing wrong with having experience and riding this bike, because it’s a great city bike – the perfect daily ride if you like.

It’s comfortable and the seating position is good. There is no lower back pressure and no undue pressure on hands or wrists, with a light clutch lever and grips that feel nice and comfortable as well. All in all it’s pretty damn good.

We like the classic Harley-Davidson look of the bike and it sounds great. Of course there are many aftermarket bits and pieces that can be bolted on to make it as individual as you want it to be too, and the colour range is fantastic, especially for what is essentially an entry level bike.

There are a number of colours available including Fire red (the test bike), Vivid Black Deluxe, Vivid Black, Black Denim, Fire Red Deluxe and Superior Blue. As an entry level bike, anyone who rode this would still be happy for a long time after a full licence has been achieved.

Does it have faults, of course it does, and there are a couple of things that could have been done better with the Street 500. The nice thing is they are mostly minor issues which will bug some riders, and not bother others at all.

For example, the pegs are in the wrong position and hit you in the shins when stopped, and you also have to use a pretty wide stance when sitting at lights or a stop sign.