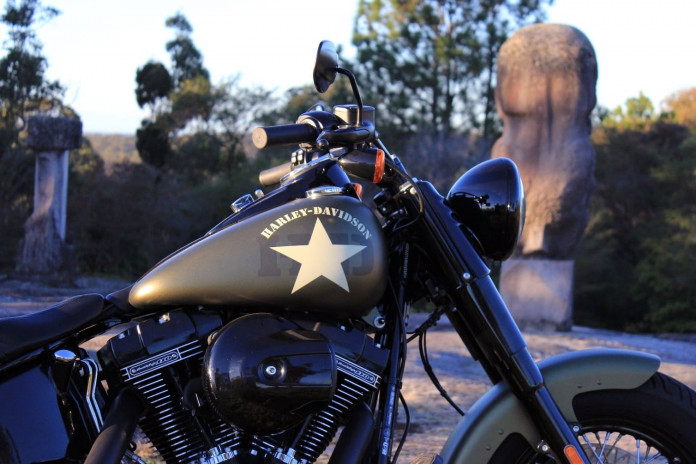 THE authentic look of a Softail motorcycle comes from the days before anyone knew much about building suspension. The rigid hard tail frames of yesteryear had a pure, uncluttered look that riders still love today.

But the bone rattling ride meant your grandpa needed to strap on a kidney belt to keep his internals intact. Fast forward to 2017, and the Harley-Davidson Softail family uses modern technology to consign the kidney belt to the museum.

You get the classic lines of a vintage “hardtail” frame with the horizontal rear shocks hidden in the guts. It’s a signature rigid look, and you’ll only find it on every Softail model.

The range also includes the legendary Fat Boy, and the Heritage Classic. First things first though, it’s hard to go past the stunning look of this bike. The Slim S has a fantastic look, with a blacked out frame, and painted Olive Green tank and farings.

The bright white retro Star painted on the tank really makes the Softail Slim S something of a looker, and we just love the cleanliness of it. It has everything you need and nothing you don’t.

Just a solo seat, a nice clean chopped fender and the fact that it features Harley-Davidson’s throttle by wire setup and a hydraulic clutch to keep the bars looking nice and sanitary, and make it the total “look” package.

The Softail Slim S comes standard with cruise control, which is great for highway cruising and an astoundingly quick motor. It’s the lightest bike that Harley-Davidson has put the 1,801cc or 110ci twin-cam motor into.

The Slim S comes in at 321kg (operational weight), and when you pair that with the 145Nm of torque all the way through to 4000rpm, you have a rocket ship on your hands, well for a Harley-Davidson cruiser at least.

One twist of the throttle and the surge of torque hits you exactly where it counts. With the 110ci motor slamming those big pistons up and down, it is bound to increase vibration, but we were pleasantly surprised by a lack of any major shake.

This air-cooled 45-degree Screamin Eagle V-Twin engine, with electronic sequential port fuel injection at its heart, is a prime example of what makes a Harley-Davidson motorcycle more satisfying than anything else.

Paired with the cruise drive 6-speed manual with heel and toe operation, the Softail Slim S is the ultimate cruiser. Its clean, uncluttered shape fits perfectly in the down tubes of the frame. In the Harley-Davidson camp, more power and rumble is better, and we agree.

The Screamin Eagle V-Twin will see you screaming from 0-100km/h in just 4.8 seconds; just make sure you hold on tight to those handle bars. Fuel economy is pretty good too as well for such a thumping engine, achieving 6.0-litres/100km.

The Softail Slim S is fitted with an 18-litre fuel tank, so achieving some good kilometres on the highway can be done quite easily. We’re sold on the vibration isolation in the foot boards too, however we did feel a little in the bars at 110km/h and above.

It’s steadiness in big sweepers is comforting, but we quickly experienced its shortcomings in tight stuff, mainly because it has a lack of clearance and is heavy to transition (just remember this is a cruiser not a super bike).

Suspension is also a mixed bag. The burly fork and meaty front tire provide plenty of stability with its combination of just the right amount of travel and springs that rebound quickly.

The rear suspension though could use a little more “soft” in its Softail. This was most evident in the chewed up road from Sydney’s North Shore to the Central Coast, cruising up that biker’s heaven known as Old Pacific Hwy.

Square a pothole and it slams off the bottom with a jarring blow felt in your lower back.

As we mentioned before, we love the rigid look provided by mounting the horizontal rear shocks out of sight, but while that’s great for smooth roads, we believe more suspension travel would benefit overall ride quality.

The instrument cluster too has everything you need and maybe a little more, fitted with a tank mounted electronic speedometer/odometer, a clock, two trip meters, RPM/gear display, fuel gauge with low fuel warning light and a countdown feature.

The security system on any newer Harley-Davidson is outstanding, however very very sensitive. We found moving the bike in any way would set the alarm off, and even though we understand why this is the case, it can be seriously frustrating.

We get that you really don’t want anyone touching your baby whilst it is parked up, but it would be good if the key fob had a slightly stronger signal output so you could at least sit on your bike whilst you got your gear sorted out for your ride home.

Just like any other Harley-Davidson, there is an array of accessories to tailor the Slim S to your taste and create a machine that makes a statement. Harley-Davidson’s are after all, as much a lifestyle as they are practical transport.

If that’s what you look for in a bike, the 2017 Softail Slim S, with its hugely powerful motor and stylish traditional “bobber” looks, makes for a compelling package.