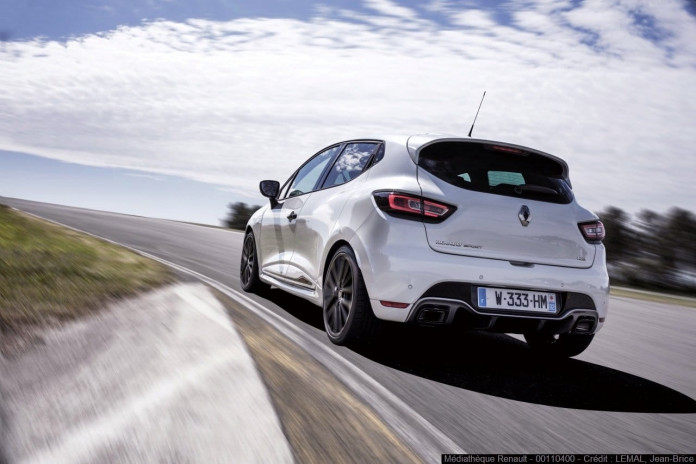 THE new look Renault Clio R.S. Trophy has more bite and more bark than ever, and is primed for launch in Australia, bounding off the boat in a feisty frame of mind, keen to hunt down a tasty piece of track or challenging back road.

Boasting a new peak of 162kW of power and up to 280Nm of torque from its highly-efficient turbo-charged 1.6-litre engine, the new hot hatch comes with a lower riding body (-20mm at the front and -10mm at the rear), 40 percent stiffer rear springs and stiffer dampers, and a 10 percent faster steering rack (13.2:1 ratio).

The exotic lightweight titanium Akrapovič exhaust system from the turbo back creates a memorable soundtrack, ideally suited for traversing soaring mountain passes and the deepest tunnels, with a larger turbocharger beating in the Trophy’s heart, with revised mapping boosting boosting the power output by 10 percent over the regular Sport or Cup versions.

Peak torque of 260Nm– identical to that of the 200 versions – can also be raised by a further 20Nm to 280Nm through the ‘Torque Boost’ feature in fourth and fifth gears. This gives the Trophy even sharper on-road acceleration and faster lap times on a track.

The revised air intake and exhaust system minimise back-pressure losses and the R.S. Trophy can rush its way to 100km/h in just 6.6 seconds.

As with the just updated Clio Renault Sport Cup and Sport versions, the Trophy employs the six-speed efficient dual clutch (EDC) transmission with aluminium shift paddles for manual gear selection and the Trophy’s EDC has been substantially recalibrated by the performance experts at Renault Sport.

The steering wheel-mounted paddles have 30 per cent shorter travel to provide a more immediate and responsive feel. The higher rev limit along with new software calibration allows earlier down-changes under heavy braking during track use.

The Trophy also comes with Formula One-style ‘Launch Control’ for perfect standing starts, while ESC and ASR traction control can be fully disconnected. Finally, the R.S. differential improves cornering grip and standing start performance and counters under steer where enthusiastic driving is permitted.

Put all this together with its track-ready Michelin Pilot Super Sport 205/40R18 tyres on 18-inch Renault Sport black alloy wheels and it’s easy to see how the Clio Renault Sport Trophy can be viewed as being more tenacious than a pit bull’s grip on an incautious postie’s trouser leg.

The new Trophy version joins the Sport and Cup models in featuring LED multi-faceted lighting in the form of a chequered flag, dubbed ‘R.S. Vision’. This provides a distinctive look and outstanding lighting performance.

Inside, the Clio Renault Sport Trophy is resplendent in black leather sports seats with red highlight stitching and an embroidered R.S. logo on each individually adjustable headrest. The front seats are heated and the passenger’s is height adjustable.

There are carbon-look air-vent surrounds, door handles and gear lever base plate; while the air-vent inserts themselves are finished in satin chrome. On the dash is the latest iteration of the R.S. monitor with on-board telemetry performance tracking system, phone mirroring for Android phones and R-LINK navigation and multimedia with voice control.

The BOSE® premium sound system, optional on Clio Renault Sport Cup and Sport versions is standard, and offers seven high-performance speakers; a pair of dashboard tweeters, two woofers in the front doors, two speakers in the rear doors and a rich bass woofer in the boot along with a digital amplifier equipped with BOSE® DSP.

The new-look limited edition Clio R.S. Trophy goes on sale immediately. It is priced from $42,990 drive away, including metallic paint. It is available in four colours, Deep Black and Flame Red metallic paint or the Liquid Yellow, Pearl White signature colours (available at extra cost).