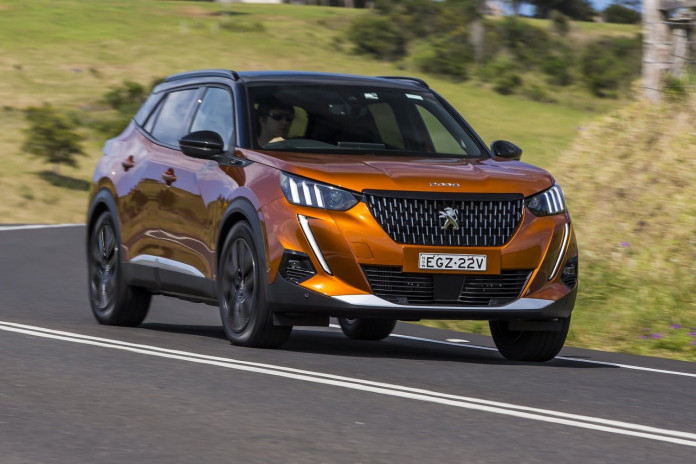 WE jumped at the chance to go along to the media drive day for the new Peugeot 2008 when the boss hollered the other day, with the new offering from the French car maker entering an already over stuffed market space.

A wealthy mate once told yours truly he’d never buy a Lexus because the colours were too ‘Japanese’ and not Euro enough. The wild and crazy guys at PSA (parent brand of Peugeot and Citroen) could never be accused of dull and boring colours.

The question is, will those good looks be enough to command the premium prices Peugeot is asking for its new entry level machine in Australia? Well the jury is out on that, but the new 2008 is a very capable, enjoyable and reqarding little SUV.

It will hit our roads from December, with a starting price of $34,990 for the Allure and $43,990 (both plus on roads), for the more highly equipped GT Sport.

The 2008 looks like it will take the place of Peugeot’s conventional entry level hatch, the 208, for while there is a new 208 coming late in 2021, it is likely to be powered by a full battery electric drive train rather than an internal combustion power plant.

In keeping with an industry trend for small cars, the new 2008 is pushed along by a three cylinder 1.2-litre turbo, similar to the Toyota Yaris, Ford Fiesta and Puma, MG ZST and a myriad other little machines.

The reason is, a three cylinder is smaller and lighter than a four, making it easier for engineers to package in small cars. It makes the increasing safety standards work, has less moving parts, and is therefore more efficient.

That’s particularly so when you bolt a turbo on and boost the power. It is also part of an overall downsizing of engines, mating them to turbos and smart auto transmissions that help keep the little donks in the power band, while producing impressive fuel economy.

That is exactly what the Peugeot engineers have achieved with the 2008. The interesting out of phase ‘burr’ from the three cylinder hums away in the background and you find yourself being propelled along quite rapidly.

The six speed Aisin auto in the Allure (eight speed in the GT Sport) shifts nicely up and down the box too.

One gets a very clear signal from the local Peugeot Australia GM Kate Gillis that they are looking to sell the 2008 and the rest of the brand on its ‘French-ness’, and not worry about playing too much with those below it in the price stakes.

“We really needed to focus on standing out from the crowd and demonstrate how different Peugeot is to introduce Peugeot to an entirely different customer,” she said at the launch event.

At the start there will be just the two variants, but a third model, the GT, will join the Allure and GT Sport in the middle of 2021, presumably sitting somewhere between the two in its price point and equipment level.

The pricing can be considered premium, but both current variants are very well equipped and offer a myriad of convenience and safety features, demonstrated by the fact the only option on the GT Sport is a panoramic glass roof.

The Allure offers plenty as a starter with a 7.0-inch touchscreen, Apple and Android smartphone connectivity, two regular USB ports for both front and rear seat occupants as well as a new age USB-C port in the centre console, and a wireless phone charger.

Over and above that, the GT Sport boasts Nappa leather, a 3D-navigation display on its 10-inch touchscreen, eight-colour interior ambient lighting, a panel of touch-sensitive control buttons, heated front seats with a massage function, and aluminium pedals.

Both models get an interesting three layer instrument display, and Peugeot’s iCockpit digital dash. Normally we would praise Peugeot’s ergonomics, but the iCockpit has never worked for us.

The compact, squared off steering wheel has to be set really low to get a clean view of the display, which for us means the wheel is always too low and can’t be used in a comfortable position.

Peugeot says the 3D or three layer instruments can save 0.5 seconds on a driver’s reaction time in an emergency as a result of the ‘fast-and-bold reaction’ they highlight.

The 2008 is also based on the company’s new common modular platform, which can be adapted to a range of power trains, including PHEV and battery electric.

As one would expect, the safety package on the 2008 is extensive and includes all of the latest electronic aids. Both variants have speed sign recognition that can be mated to cruise control to maintain legal speeds if the driver desires.

There’s also autonomous emergency braking and adaptive radar cruise control, with pedestrian and cyclist detection, as well as lane departure warning. As an extra, the GT Sport can detect pedestrians and cyclists in the dark.

The GT Sport also picks up lane positioning assist, which works in tandem with the radar cruise control for semi-autonomous steering, as well as active blind spot monitoring and adaptive cruise control with stop-and-go function.

There is no rear cross traffic alert, with Peugeot declaring there is no need for it because of the 2008’s good rear vision and 180-degree rear camera with rear parking sensors.

The allure has a lower level of tune from the three cylinder 1.2-litre turbo engine, delivering 96kW of power and 114Nm of torque, while the GT Sport offers 114kW and 240Nm of torque. The difference is clearly noticeable.

This is amplified by the fact that the GT gets the eight speed auto with paddle shift, allowing the car to be in the right gear more often, while the extra grunt means it just feels quicker and zippier.

The added power and torque for the GT Sport is as a result of a number of tune items including larger fuel injectors, and a high flow turbo. The Allure delivers 6.5-litres/100km fuel economy, with the GT Sport good for 6.1-litres/100km.

It’s still only front-wheel drive, but it is a very good platform and offers good traction even on the slippery rain soaked roads of Sydney’s Ku-ring-gai Chase National Park.

Interestingly, the entry level Allure comes with multi-mode selection for optimising traction in low traction conditions with a snow, mud and sand mode available, as well as hill descent. It also comes with ‘multi-purpose’ tyres.

There’s no multi-mode traction settings in the GT Sport but it does come with paddle shift and a Sport mode that adjusts shift points for better performance.

Tackling some twisty and hilly roads on the drive revealed excellent ride on the Allure, which comes shod with 17-inch alloy wheels, while the GT Sport had similar levels of grip and road holding, but a slightly harsher ride on 18-inch alloys with lower profile tyres.

Both cars have the same suspension tune, which is the reason why the GT has the harder riding nature. It’s not a deal breaker and some might prefer the more tied down feel, but it comes down to personal preference.

Peugeot says it is ‘Un-boring the Future’ and it has made the 2008 ‘Un-boring’. Largely it meets that tagline, because it looks a lot better and less mundane than most other SUVs in this class, but it does miss the mark in some areas.

The iCockpit and interface with the steering wheel is one area that really annoys us while the discrepancy in ride quality between the two models is also a bit frustrating. To our feel the Allure has more of the Peugeot suspension culture about it.

It’s a more supple and easy gait compared with the harder feel of the GT, for no extra handling benefit. For all that the 2008 has some endearing qualities with good spirited performance, great steering feel and response and excellent stopping power.

It has a comfortable and relatively luxurious interior with a huge load space and a full suite of safety features. The 2008 won’t be everyone’s cup of tea but that suits Peugeot, it wants to sell more but won’t be taking on the cheaper Japanese and Korean opponents.

Only time will tell if the Peugeot recipe for the new 2008 emerges from the heat of the Australian market as a perfectly formed soufflé, or a failed recipe.

Exhaust Notes Australia will bring you a more thorough test drive in the coming months, as the 2008 makes its way on to Australian roads.