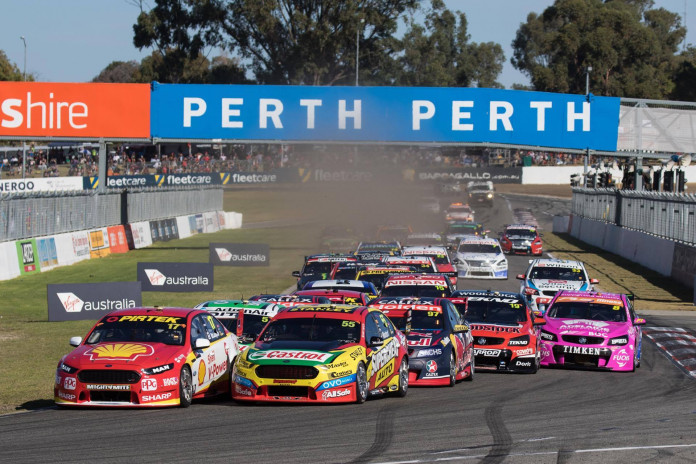 McLaughlin’s qualifying efforts in 2017 have been nothing short of incredible, with six front row starts, including four poles, from eight sessions. His worst start this year has been from the third row.

Mostert grabbed the initial jump but it was McLaughlin who had the run into turn one and started to pull away from the field in the opening lap while Prodrive’s Mostert and Winterbottom tussled with Whincup and Shane van Gisbergen.

“There’s pressure having the big dogs in town, but it’s good for the boys too to show what they do with the boss,” McLaughlin said. “My goal was to take points away from the top four and we did. This weekend was ideal for me.”

While there has been much talk of 2017 becoming a two horse race, Mostert says Prodrive Racing Australia is finding its stride and will have more pace as they start to roll out new developments.

“We’re starting to find a base with our car, but there’s a lot of other things we’re working on. We haven’t got any new parts on the car yet but we’ll be rolling out some things in the coming events,” Mostert said.

“[Penske and Red Bull] are punching and are there every weekend, but we got a win at Phillip Island and a solid second today. We just need to be consistent and finish in the top five every weekend.”

A winless Whincup is also playing down the recent surge by Shell V-Power Racing and is adamant the new factory Holden team is not far off.

“All the questions are pointing towards doom and gloom but it’s not the case. We got two podiums this weekend and there’s a lot of water under the bridge before Newcastle,” Whincup said. “It’s just all those one per cent factors. We’ll chip away and get there.”

Ford’s Mark Winterbottom claimed fourth ahead of Will Davison – who recorded his best result of the year. Van Gisberen was sixth with Fabian Coulthard, Craig Lowndes, Garth Tander and Nick Percat rounding out the top 10.

Triple Eight rolled the dice on a three-stop strategy for Lowndes, who recovered from the rear of the grid following issues on the warm up lap. Today’s result had little bearing on the overall points after the fourth event, with Coulthard (802) still leading van Gisbergen (783), and Whincup (780), with Mclaughlin and Mostert tied in fourth (771).

The Supercars championship picks up again in two weeks’ time at the Victorian teams’ test track, Winton Motor Raceway. While there is always talk of home ground advantage, ironically it is Walkinshaw Racing’s worst venue statistically speaking, with only four wins at the Victorian venue.

Given its recent form, with Courtney finishing 22nd today having needed a splash and dash, it is unlikely this year will see them add to the tally. Winton has also been a happy hunting ground for Nissan Motorsport, claiming its first win at the rural Victorian venue in 2013 and a podium finish in 2015.