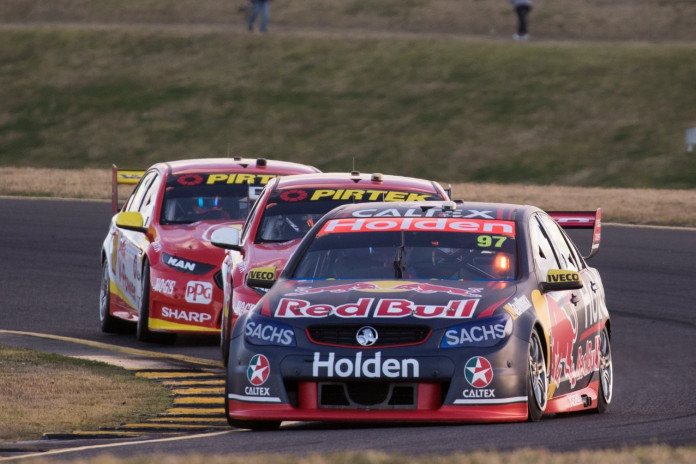 A post-race investigation will take place tonight for a controversial restart in the Virgin Australia Supercars Championship today, which was the pre-cursor to Red Bull’s reigning champion Shane van Gisbergen being taken out by title leader Scott McLaughlin.

The #17 Penske Falcon was in control of the race on the restart following a safety car to clean debris with SVG overlapping and making slight contact several times on the run up the main straight to the control line.

Van Gisbergen flew past and took the lead, but it was short lived with McLaughlin spinning him at turn two. McLaughlin openly admitted he was at fault and apologised to van Gisbergen as soon as the chequered flag fell – a move that appeared to be welcome by SVG.

“It was a complete balls-up on my part. Sorry to Shane and sorry to all the fans at home,” McLaughlin said.

Under the Supercars rules, overlapping is permitted ahead of a restart, according to Schedule D, rule 11.2.3 which reads “It is permitted to overlap prior to the Control Line, but only after the apex of the final turn or another turn as nominated by the RD [race director], and provided the green flags have been displayed. Overtaking remains strictly forbidden until across the Control Line, unless a Car slows with an obvious problem”.

Fabian Coulthard took out the race ahead of teammate McLaughlin, who was relegated to 10th after being issued with a 15-second penalty for the contact of van Gisbergen, Prodrive Racing Australia’s Chaz Mostert and Red Bull Holden Racing’s Jamie Whincup.

Many feel the 15-second penalty was not severe enough, with McLaughlin still finishing ahead of van Gisbergen, who managed to salvage fifteenth in the end, although the podium placegetters were not keen on answering if the penalty was fair or not.

UPDATE: On Sunday morning race officials hit McLaughlin with a further 18 second penalty, as well as issuing van Gisbergen with a 33 second penalty for his part in the incident. The resulting adjustments push the duo to 22nd and 24th respectively in the results.

A further 200km race takes place today (Sunday), which is expected to be another Penske vs Red Bull battle, with Prodrive Racing Australia looking to be the only other outfit who can challenge the two benchmark teams.