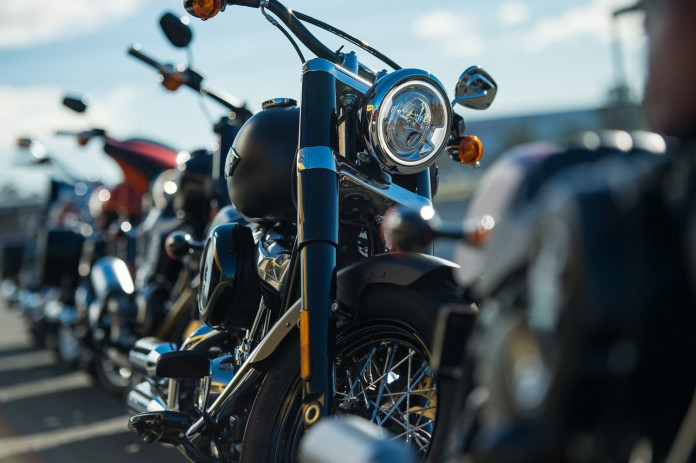 IT’S cold. Almost bitterly so on what appears to be Sydney’s first true winter morning. It’s Wednesday, 29 May, and we’re at Sydney Motor Sport Park at Eastern Creek. Never mind the weather though, we’re here for the Harley-Davidson National Softail Tour.

Glistening in the winter sun is the entire 2019 Softail range, and Exhaust Notes Australia is part of a gathered throng of media, dealers and customers who get to ride them. Similar events are also being held in Melbourne, Brisbane, Adelaide and Perth.

Our day started with a rider’s briefing before we were let loose for our initial set of four laps of the track that once hosted the Australian Motorcycle Grand Prix. Our first of six bikes is the timeless classic, the 2019 Harley-Davidson Softail Deluxe.

Bathed in chrome, it’s a bike with true nostalgic character. It’s a delight to ride; light, with good balance into the corners, steady under hard braking. Fitted with the Milwaukee Eight 107ci motor, it had plenty of poke in the straights.

The Deluxe doesn’t quite have the lean angle of some of the more modern looking Softails, but it’s definitely a fun ride. Onto bike number two we go; the Harley-Davidson Breakout – the star of the cruiser segment and one of the sexiest bikes on the road.

There’s no foot-boards, and it’s a longer and narrower ride, and an amazing one at that. The Breakout is outstanding and our time on the big 114ci unit seems to fly by. Before we know it, we’re onto our third ride of the day.

It’s one of the most famous Softails of all time, the new 2019 Harley-Davidson Softail Heritage. The big 114ci bike features a windshield and new hard saddle bags. It’s a thing of beauty, with an upright seating position that feels effortless to ride.

There are foot-boards on this one, and they are definitely a limiting factor when cornering. It’s available as a 107ci as well, for those keen for a slightly smaller power plant. The 114ci version has a tonne of grunt though and was one of our favourites.

If the Heritage was the favourite, the 2019 Harley-Davidson Sport Glide was the absolute surprise packet. We’d heard some good things about this bike, but had not had the opportunity to climb aboard one.

Draped in scorched orange paint, and fitted with detachable saddle bags and a frond wind deflector, it was definitely eye-catching. But it’s more than that, with great lean angles, a nimble and versatile feel, and a Milwaukee Eight 107ci engine, it’s a great bike.

Bike number five, we’ve already ridden, but never on a race track. The opportunity to go hard on a 2019 Harley-Davidson FXDR was one too good to pass up. The result left us more in love with this bike than we already were.

The track is its true element. It just feels fast and has it’s own unique character. It felt sure footed around corners and had one of the best lean angles of all bikes tested. One bike to go, a 2019 Harley-Davidson Fat Bob.

Everything about this bike was different to what we expected, from the upright seating position to the vastly improved braking and suspension. The more we rode it, the more we wanted to keep riding it.

The experience of riding an entire range of bikes, in the same conditions on the same day, was nothing short of sensational. We were quickly able to identify the major handling and braking improvements, and test out the enhanced ride experience.

At the same time, we also uncovered obvious differences in the character of some members of the 2019 Harley-Davidson Softail range. For example, the more traditional rides like the Deluxe and Heritage have maintained their history, but are better to ride.

The newer generation bikes such as the Fat Bob and FXDR are far more aggressive and uncompromising and aimed at a more performance orientated rider. Then of course there are things like the Sport Glide, which just puts a whopping big smile on your face.

According to ANZ marketing manager for Harley-Davidson, Keith Waddell, there’s much more to come from the brand too. We had the chance to catch up with him at ‘the Creek’ and confirm the 2020 arrivals of the LiveWire, Pan America and new Streetfighter.

He tells us there’ll be a continued emphasis on current traditional markets and platforms to support the Harley-Davidson faithful, but that the future has some more electric surprises in it; news that’s sure to excite new, younger fans of the legendary brand.

Exhaust Notes Australia attended the 2019 Harley-Davidson National Softail Tour as a guest of Harley-Davidson Australia. We would like to thank them for the opportunity to be part of this special event.