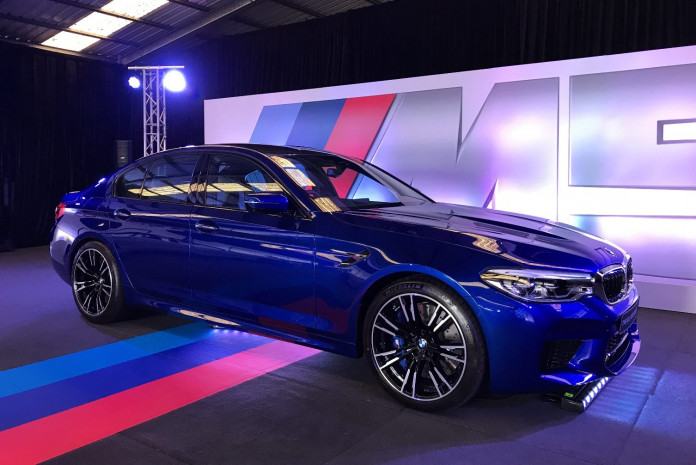 TO celebrate the Australian launch of the new sixth generation BMW M5, Exhaust Notes Australia was fortunate to be amongst a select few to be invited along to a track day at the Norwell Motorplex in Queensland.

Unfortunately, the usual sunny and humid weather which Queensland is famous for was nowhere to be found, instead replaced with wind and rain. Either way, it wasn’t going to spoil our day in one of the most hotly anticipated cars of 2018.

Kudos too to BMW for recognising the best way to launch a performance car in a nation known for its love of big, brawny V8s, is on a race track. But what is it about the F90 M5 that makes it so special.

The 2018 BMW M5 is the fastest M car ever built, thanks to an updated version of the S63 twin-turbo 4.4-litre V8 found in the previous generation M5, and the first M car to offer the all-paw grip of all wheel drive (which can be switched to 2WD on demand).

With numbers like that, it’s no wonder the latest generation M5 has already been crowned World Performance Car of the Year for 2018. Right then, time to hit the track, or at least start our track day.

The half-day event started with a classroom session from BMW Australia’s Area Manager for M and i Cars, Alex Brockhoff, who outlined some of the new and exciting products in the BMW pipeline.

He also gave us a walk down memory lane with a synopsis on the five previous M5 generations, as well as some technical data on the latest model, before we received a crash course on track driving from the BMW Driving Experience team.

Just prior to being split into our respective groups, we were given a special treat by BMW Australia – access to an Aladdin’s cave of all the current BMW M cars, with everything from the M2 to the M6 on display.

We were given the heads up that the day would including some solo laps in the M4 CS and M5, a drift lesson on the skidpan, and finally, some hot laps in the passenger seat of the new performance BMW, with 2WD activated.

Given the weather was not exactly track friendly, with intermittent rain throughout the morning, the sessions were always going to be a little more interesting, and for those accustomed to mastering racing lines from hours of playing video games like Gran Turismo; real world driving conditions are about to bin everything you know.

First up we were given the keys to the new BMW M4 CS, a lightweight version of the M4 and the peak offering in the model range. On a wet track, the M4 CS is certainly a car to be treated with utmost respect.

Some 338kW of power and 600Nm of torque driving the rear wheels means that any momentary lapse in concentration could result in the car veering off track faster than you can say M4 CS.

After five laps in the M4, we came away extremely impressed with what BMW has achieved in developing a track focused car that can also double as an everyday road car. If you’re going to track one though, we recommend some professional training.

Next up, the opportunity to experience the difference between RWD and AWD, and step behind the wheel of the hero of the day, the new M5, and fire up the V8, a louder, more pronounced offering than the humble M4 CS.

Not only is it a much larger car inside, as you might expect, there are also more gadgets and tricked up technology than you’ll find in the latest smart phone. All of this tech is very user friendly though.

Driving around the Norwell circuit, the grip offered by the M5 in AWD mode (with the support of the Active M diff) is nothing short of phenomenal. On a wet track, the confidence provided by the system turns any mere mortal into a pseudo F1 driver.

The pulling power from the M5’s twin-turbo V8 is astonishing – you can literally feel your skin being pushed back from your face when you accelerate, yet it feels so easy, almost clinical in nature.

Overall, the track session was a real eye opener to feel the differences in RWD and AWD, and while there’s no doubt RWD is more fun, it also demands a higher level of skill and concentration.

On the other hand, AWD makes this task oh so easy and can make an average driver look like a pro. While the M4 CS is no slouch in its own right, we definitely noticed the additional power and torque offered by the V8 in the M5.

Onto the skidpan activity to check out the drifting abilities of the new M5. Yes we know most M5 owners have no plans to emulate scenes from The Fast and The Furious: Tokyo Drift, but at least we know it can be done.

The skidpan also pitted all attendees against each other to see who could hold their drift the longest, with a BMW M watch on offer for the winner. For those who have never attempted drifting before, it is quite a difficult thing to execute, just so you know.

While we won’t reveal how many cones we were able to drift around, let’s just say it wasn’t enough to take home the prize on the day.

Finally it was time to jump in the passenger seat to experience the new M5 at full noise, in 2WD mode, in the hands of an expert. Given Dynamic Stability Control is also deactivated in this mode, this was quite an exciting moment for us.

It took just two complete laps of the track in the M5 for us to realise we are better off writing stories on our computer than trying to be the next Daniel Ricciardo, such is the gap between our driving abilities and the professional instructors.

Overall, the track day for potential M5 customers is a fantastic initiative by BMW Australia. It provides something a normal test drive doesn’t – a genuine chance to experience the full capability of the car, in a controlled environment.

For the lucky few that did attend with us, we have no doubt that everyone finished the day with a hole in their heart that could only be filled by a sixth generation F90 M5. We’re off to find a winning lottery ticket so we can own one too.

Our attendance at the 2018 BMW M5 customer launch event came courtesy of Coastline BMW on the Sunshine Coast. We thank them for giving us the chance to be part of such an awesome day.