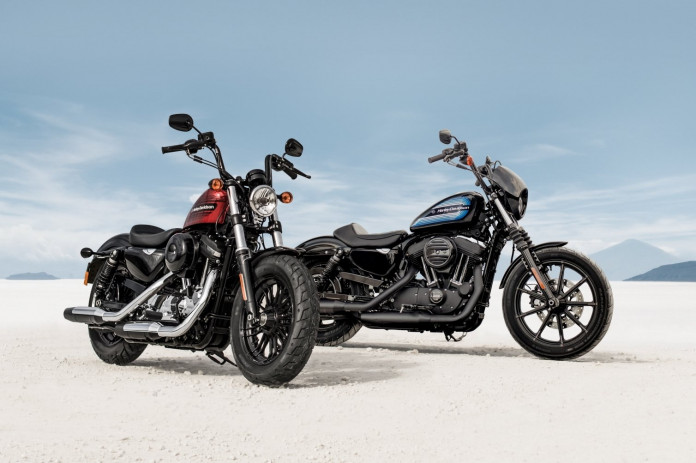 Since their introduction way back in 1957, sportster style motorcycles have been a hallmark of the Harley-Davidson brand, re-imagined repeatedly by bike maker and owner alike along the way.

The Sportster has been a bobber, a chopper, a scrambler and a café racer; a hero on flat tracks and drag strips and road-race courses; an accessible entry-point for first-time riders, and a custom cruiser.

Now Harley-Davidson is launching two more, the Iron 1200 and the Forty-Eight Special, with both bikes featuring high handlebars and custom graphics, throw-back designs and plenty of modern performance bits.

The new bikes, the latest in a line of 100 high-impact motorcycles the company plans to introduce by 2027, are powered by the Evolution 1200 V-Twin engine and have a real custom bike feel.

New fuel tank graphics distinguish both the Iron 1200 and the Forty-Eight Special, and combine bold colour stripes with a formal typeface, colour and graphic elements originally popular in the 1970’s.

In the case of the Iron 1200, the new ride brings more punch to the street fight – more power to blast away from green lights and more mid-range to muscle through traffic. More power means more disruptive fun.

The jet-black Mini Ape handle bar is an essential element of the garage-built chopper look that adds instant attitude and the gloss black speed screen framing the headlamp is a West Coast styling influence that amplifies the attitude of the tall bars.

A classic 3.3-gallon Sportster fuel tank features multi-coloured striped graphics that wrap around the tank profile, and is available in Vivid Black, Twisted Cherry and Billiard White, with the entire power train in black.

Chrome pushrod tubes and tappet covers are the only bright work and highlight the V-Twin engine shape. The Iron 1200 is finished with all-black 9-Spoke wheels (19-inch front and 16-inch rear diameter) and a solid black belt guard and rear sprocket.

The Harley-Davidson Smart Security System and anti-lock braking system (ABS) are fitted as standard for the Iron 1200 model. Prices start from $16,495 ride-away in Australia and $16,995 in New Zealand.

The Evolution 1200 engine features a black top end and an expanse of brilliant chrome below, including chrome primary, inspection and derby covers, and solid chrome muffler and exhaust shields.

The Harley-Davidson Smart Security System and anti-lock braking system (ABS) are fitted as standard for the Forty-Eight Special model. Prices start from $18,995 ride-away in Australia and $19,750 in New Zealand.

The Harley-Davidson Iron 1200 and Forty-Eight Special motorcycles will start rolling into showrooms from the end of April 2018.