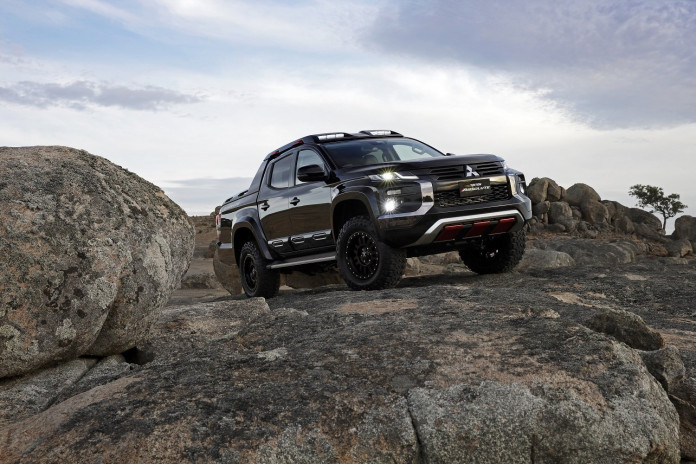 TAKE one 2019 Mitsubishi Triton ute and inject it with some steroids. What you get is a ute that sits on a wider track, features heavy duty off-road tyres, upgraded suspension and body panel changes aplenty.

It’s called the Triton Absolute, and was revealed this week at the Bangkok International Motor Show. The changes are bold, and include a body lift of 50mm for improved ground clearance, more suspension travel, and superior ride and handling.

The striking design of the Triton Absolute will showcase the robustness of the ute’s frame, and convey the rugged and uncompromising presence of the Triton in every environment.

This special model’s protective body paneling, rugged style, and enhanced LED lighting take on the “ABSOLUTELY Beyond Tough” nature of the new Triton, which has evolved across generations of the outstanding, rugged ute series.

“The Triton Absolute concept is more robust, dynamic and powerful. It demonstrates our commitment to exploring a vision of the future Triton that will deliver on our ‘engineered beyond tough’ commitment to the Triton series,” said Mitsubishi Motors Australia CEO, John Signoriello.

“While only a concept at this stage, we will assess the feedback from customers in Australia and overseas towards a more aggressive Triton which will guide the brand’s future product development.”

The Triton Absolute will be showcased over the coming 12 months to gauge public interest and feedback.