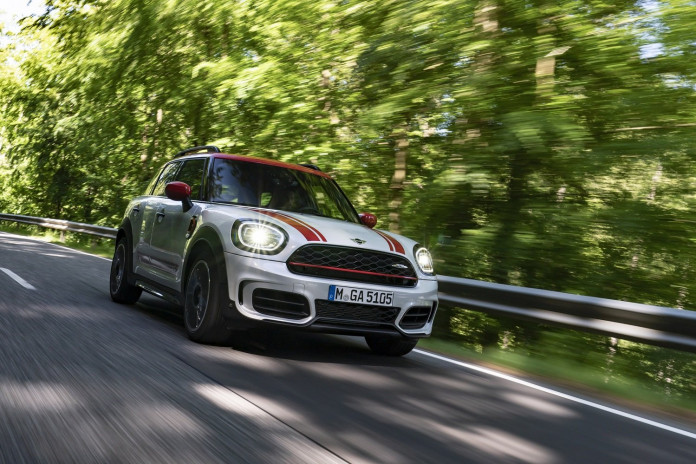 THE covers are off the new MINI John Cooper Works (JCW) Countryman, which features a fresh new look, new technology and refined equipment, all in a fun and versatile package that builds on its performance heritage.

The new JCW Countryman features similar aesthetic enhancements as the rest of the MINI range, but with its own unique styling, including a horizontal red stripe rather than an outline across the grille.

The standard LED headlights are in a new shape, and at the rear, union jack designs now integrate into the LED rear lenses, while a new exterior colour palette includes White Silver Metallic and Sage Green Metallic.

A new Piano Black exterior option darkens the headlamp surrounds, rear lights, radiator grille, door handles, and model lettering on the luggage compartment lid. But as you might expect, it isn’t all about the looks, this is a John Cooper Works model after all.

High performance is standard with the JCW range, and in the new Countryman, MINI’s TwinPower turbo 4-cylinder engine produces 225kW and 450Nm. The car also features a new sports exhaust with enlarged 95mm diameter tailpipes for an aggressive look.

This outstanding power is transferred to the road via an 8-speed Steptronic sports transmission and ALL4 all-wheel drive, with an electronic front differential lock that guarantees sublime performance on all surfaces.

Thrilling power delivery is sustained through the power band, and the 0-100km/h sprint is executed in just 5.1 seconds. In order to ensure quality handling, as well as straight line speed, the high-rigidity chassis features an electro-mechanical steering system.

Body stiffening components, dampers, suspension parts and a DSC system have all been made, or re-calibrated with John Cooper Works’ racing know-how. A sports braking system is also included as standard.

The interior of the new MINI John Cooper Works Countryman increases its appeal with a new refined surface around the circular control unit in the centre instrument panel, along with intelligently re-organised controls.

The new car will arrive in Australia in the fourth quarter of 2020, with pricing to be announced closer to the launch.