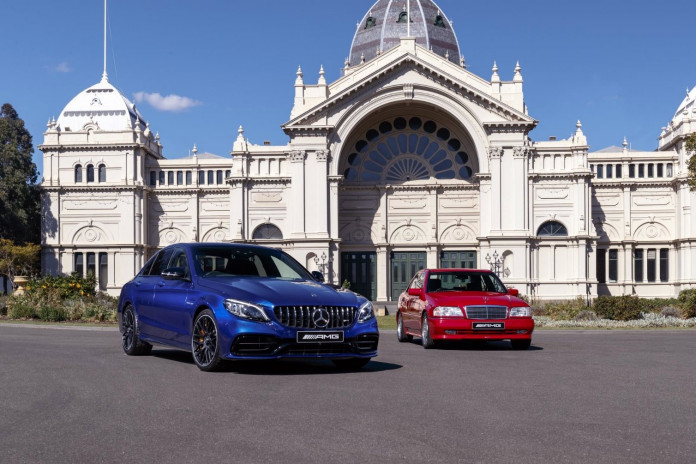 IT was 25 years ago that a revered performance dynasty was spawned with the display at the Frankfurt motor show of the Mercedes-Benz C 36 AMG, the inaugural performance model jointly developed by Mercedes-Benz and the AMG brand.

Fast forward to 2018, and Mercedes-Benz will celebrate this milestone at the annual Motorclassica exhibition in Melbourne with the Australian premiere of the latest edition of the C-Class performance family, the 2019 Mercedes-AMG C 63 S.

The genre-defining C 36 packed a 3.6-litre inline six-cylinder engine making 206kW, plus a four-speed automatic transmission. With modified suspension and dampers, bigger brakes, and the addition of traction control, it was a potent combination in its day for a street-focused sports sedan.

It’s also bundled with AMG traction control allowing preselection of the slip on the rear axle in one of nine levels. Comparing and contrasting the potent pair serves to highlight the continuous development of the brand over the subsequent 25 years.

In June 1996, the C 36 AMG started a tradition when the Affalterbach-based brand provided the official safety car in Formula 1 for the first time. That continues, with the AMG GT R leading the field in 2018.

Fans of Mercedes-Benz will be able to check another legendary classic, which this year celebrates its 35th anniversary in Australia, with the latest edition of the ‘G-Wagen’ – the new Mercedes-AMG G 63 – also on on display.

It will sit alongside an original Australian-delivered 1983 G 300 GD. While the imposing G 63 packs a potent bi-turbo V8 engine and a swathe of technological, safety and luxury features, onlookers may also be struck by the similarities between the pair.

For example, both still share trademark design features such as exposed door handles and indicator lights. Mercedes-Benz will also show off a restored Mercedes-Benz 300 SL Roadster and the track focused Mercedes-AMG GT R.

Motorclassica 2018 will be held at Melbourne’s Royal Exhibition Building from October 11-14.