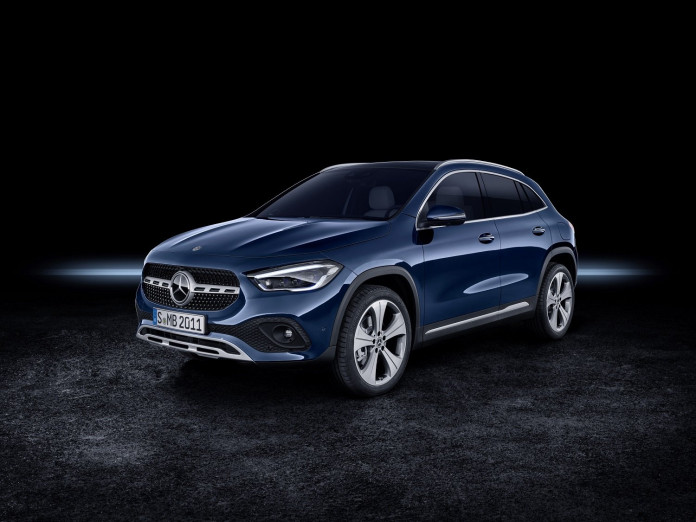 MERCEDES-BENZ has completed the regeneration of its compact vehicle family with the arrival of the new GLA crossover, which offers a more traditional SUV-like feel, which in turn delivers increased head room and legroom.

Models in the GLA range equipped with 4MATIC, the all-wheel drive system that shuffles power to where it’s most needed, will be equipped with the Off-Road Engineering Package as standard, a move first seen on the Mercedes-Benz GLB SUV.

The Off-Road Engineering Package adds an additional Off-Road driving program via the DYNAMIC SELECT controller, a downhill driving function (DSR, or Downhill Speed Regulation) and an off-road animation with incline angles in the media display.

In combination with optional MULTIBEAM LED headlamps, the package also includes a special light function for off-road driving, widening the spread of the beam for better illumination during low-speed maneuvering.

All models feature off-road design features like an upright front section, short overhangs at the front and rear, and protective cladding. The new GLA makes a further step forward in safety courtesy of driving assistance systems with cooperative driver support.

Standard equipment includes active brake assist, which can apply autonomous braking to avoid a collision or to reduce its severity. At typical city speeds, the system is able to brake for stationary vehicles and crossing pedestrians and can even avoid collisions.

Also standard is blind spot assist with exit warning assistant, which alerts the driver to approaching cyclists or vehicles if the door begins to open into their path, and active lane keep assist.

Inside, the driver is greeted by the same widescreen array of side-by-side 10.25-inch digital screens as other new-generation members of the Mercedes-Benz compact car range, whilst the dashboard is also studded with five distinctive turbine-style air vents.

The range opens with the GLA 200 from $55,100 (plus on-roads), which utilises a 1.3-litre, turbocharged petrol four cylinder engine making 120kW and 250Nm, sending power to the front wheels via a 7G DCT seven speed auto.

The Off-Road Engineering Package is also standard, along with remote engine start via the Mercedes me Connect app, and 19-inch 5 twin-spoke alloys. Prices start from $66,500 (plus on-roads).

The GLA 35 4MATIC builds on the sporty specification of the GLA 250 4MATIC, adding extra power and torque with a 2.0 litre turbocharged four outputting 225kW and 400Nm in conjunction with an AMG Speedshift DCT eight speed auto.

Rounding out the high performance offering is the GLA 45 S 4MATIC+, punching out an astonishing 310kW and 500Nm from a 2.0 litre turbocharged four cylinder engine allied to an eight speed DCT auto with RACE START, via 4MATIC+ all-wheel drive.

For a limited time, the Mercedes-Benz GLA 200 and GLA 250 4MATIC can be specified with the exclusive Edition 1 package, which includes a potent mix of additional features as well as several distinctive cosmetic enhancements, for an additional fee of course.

The Mercedes-Benz GLA 200 and GLA 250 4MATIC will arrive in showrooms from August, while the Mercedes-AMG GLA 35 4MATIC and GLA 45 S 4MATIC+ will go on sale in Q4 of 2020. Further information is available from your local Mercedes-Benz dealer.