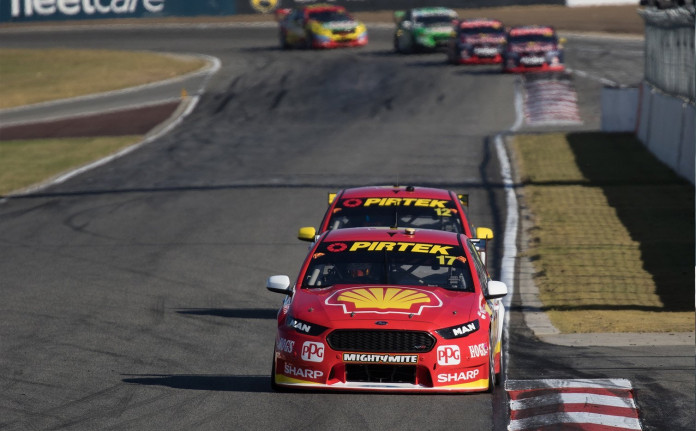 DJR Team Penske has once again flexed its muscles to deliver a 1-2 finish in Race 7 of the 2017 Virgin Australia Supercars Championship, with Scott McLaughlin leading home pole-sitter Fabian Coulthard.

It’s the first championship win for McLaughlin since joining the team, with Coutlhard handing Penske its first Supercars win at Symmons Plains. The Ford Falcon also has four Supercars victories on the trot for the first time since 2015.

The Shell V-Power Falcons looked untouchable all race, with McLaughlin leading the field away after a blinding start – so good that is raised the eyebrows of race control. He was cleared of any wrong doing and he and teammate Coulthard went on to build an eight-second buffer back to Red Bull Holden Racing duo Jamie Whincup and Shane van Gisbergen.

“The car practically drives itself,” McLaughlin said. “It’s probably the coolest thing I’ve done in a long time. It’s been an amazing day for us as a team.”

Roger Penske was the winning team’s representative on the podium – a rarity for the Captain – and both drivers took great delight in spraying their boss with champagne in one of his fleeting visits for the year.

“Roger doesn’t go on too many podiums. It’s a great day for the team with a 1-2 and apart from Dick Johnson, who better to share the podium with,” Coulthard said. “Dick got fairly drenched at Tassie. We got a little bit of clarification and got the all clear, so away we went!”

After a woeful qualifying effort, which saw him start down in 22nd place, James Courtney spent the opening stint of the race clawing his way back to 17th.

Brad Jones Racing had a challenging day, needing to carry out an engine change on Tim Slade’s Freightliner Racing Commodore between final practice and qualifying. Despite the tough start to the day, he ended up 13th..

Coulthard has extended his championship lead over van Gisbergen to 25 points, with a further 30 points back to Whincup. Chaz Mostert sits fourth with McLaughlin fifth.

A 200km race takes place tomorrow at Barbagallo, with qualifying at 10:55am Perth time and the 83-lap conclusion to the Perth Supersprint from 2:15pm.