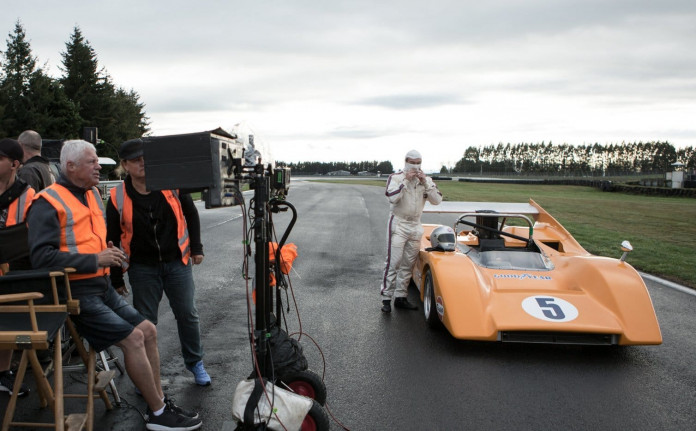 DIRECTOR Roger Donaldson had the weight of the automotive and motor sport world on his shoulders when he took on his recent McLaren movie project – which is currently showing for a limited time around Australia.

It needed to be engaging to appeal to a broader audience, but also portray the legendary status of Bruce McLaren that would appease those who knew his story – and would pull any irregularities to pieces.

As an avid car lover himself, there was little risk of Donaldson creating something short of brilliance, but he admits the response to McLaren has been overwhelming.

“If people avoid you, you start to question how it’s doing. When all of your friends and people you haven’t heard from for a while rave about it, you know it’s getting places,” Donaldson said.

Exhaust Notes Australia was blown away by the film, along with just about everyone else who has seen it.

It’s fitting Donaldson tackled this project. In the years leading up to producers Matt Metcalfe and Fraser Brown approaching him about the idea of the film, there were a number of brushes with the McLaren name.

“In the early 60s I actually saw Bruce race at Sandown Park in Melbourne, and then in the 70s when I was making my movie Smash Palace, I actually borrowed the iconic first production car Bruce built, off his father. I contacted his father and he lent me the very first McLaren road car.”

The initial concept for the film actually came from Fraser Brown, who also had his own unique connection to the name – a school friend’s father running the McLaren dealership in Auckland.

“They were talking about how ‘nobody knows that Bruce McLaren started the McLaren car company and the logo was a Kiwi,’ so they thought they’d make a film about Bruce McLaren and that’s where it all started from,” Donaldson said.

“He teamed up with Matt Metcalfe, who’s a more experienced producer and they came to me – I’d known Matt from other things we’d tried to get off the ground – they came to me and The World’s Fastest Indian was a factor in it and they thought that I might be interested, and for a number of reasons I was.”

Then came the challenge of identifying and locating the people who knew the story best.

“They were hard to track down. The very first one that I tracked down was Wally Wilmott who lives in Invercargill,” [ironically where World’s Fastest Indian subject Burt Muro is from] said Donaldson.

“He has been a close friend of Bruce’s. He’d been to England with him, flatted with him and knew him intimately as a couple of young guys. He’s a very clever, astute guy who knows a lot about all sorts of things and he’d been there on the front line with Bruce.”

Then the production team hit the jackpot – an archive of letters and audio letters between Bruce and his family. Extremely candid chats between them that became pillars of the tale.

“He wrote letters, lots of letters, but he also made tape recordings of conversations he’d have with his dad and talk about what was going on. Some of them had some of his mates that are in the movie. The family would make tapes and send them to him, he’d send them back. They were very personal. That became a great anchor for telling the story,” Donaldson divulged.

Having spoken to some of McLaren’s closest friends such as Colin Beanland and Phil Kerr, as well as motor sport legends like Sir Jackie Stewart, Mario Andretti and Emerson Fittipaldi, we don’t envy Donaldson facing the editing process. In fact, we reckon the cutting room floor contains another brilliant piece in itself.

“The editing of the film was the really tough part. You’ve got to keep telling the story, and one of the problems from my point of view was there was stuff I would just fall in love with because it was such a great story – but was it really relevant to taking Bruce’s story forward?”

Of all the interviews for the film, there is one in particular that stands out – Jim Stone. It’s a beautiful, raw and emotive chat that to this day still moves Donaldson.

“He was speechless. The people that were closest to Bruce and the most devastated were Jim Stone, Cary Taylor and Alistair Caldwell. But Jim Stone, he just couldn’t talk about it. It makes me tear up just thinking about the guy because he didn’t want to talk but he would have kicked himself for ever if he hadn’t taken part in the film,” Donaldson lamented.

“Phil Kerr and Chris Amon knew Bruce, were mates with him and prepared to tell all they knew about him. They loved him and were devastated when he died. Bruce’s wife too, Patty.”

Donaldson is incredibly proud of McLaren – and rightly so – but he admits there is one element of the film that isn’t as brilliant as he feels it could have been.

“I did regret that I didn’t get a better shot of Patty. That interview I did over Skype – she was too sick to see me when I was in England and then one day they said she would talk to me after all but I had to do it by Skype.”

As we said in our review, there are few films that portray the true essence of motor sport. McLaren is definitely one of them, and not to be missed.

McLaren is currently showing in limited release around Australia for a short time only. Check local movie guides for details.