Lowndes and Whincup: Putting the band back together 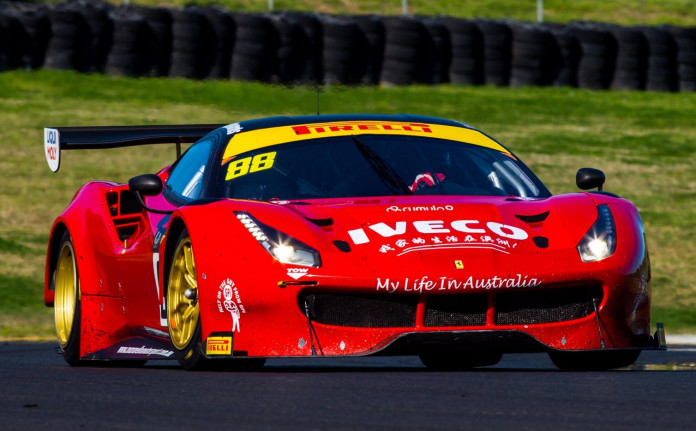 Craig Lowndes and Jamie Whincup will share a car for the first time since 2009 at next year’s Bathurst 12 Hour, pairing up in the Maranallo Motorsport Ferrari 488 GT3.

The Lowndes/Whincup combination won three consecutive Bathurst 1000 crowns between 2006 and 2008, but changes to the Supercars rules prevented the two Triple Eight drivers from racing together from 2010 onwards.

Lowndes and Whincup between them have 10 Bathurst 1000 victories, and will be joined by a factory Ferrari GT driver. The team will also be bolstered by the provision of an engineer and staff by Triple Eight.

Lowndes has celebrated success with the Maranello outfit before, winning the 2014 12 Hour alongside John Bowe, Peter Edwards and Mika Salo.

“I am delighted to have the chance to defend my victory in the Bathurst 12 Hour of two years ago with Ferrari and Maranello again,” Lowndes said.

“Jamie and I have enjoyed a lot of success together at Bathurst, so it’ll be great to pair up again, and to have the engineering support of Triple Eight. I can’t wait.”

It will also be Whincup’s 12 Hour debut and his first foray in GT racing.

“The Bathurst 12 hour is an event I’ve been keeping an eye on for a few years now. I’ve been patient waiting for the right opportunity and feel I’ve found it with the Maranello/Triple Eight combination,” Whincup said.

“I’m excited to be teaming up with Craig again after more than six years and also look forward to learning to drive a left-hand drive, high downforce, turbo car fast.”

Lowndes and Whincup are also expected to be joined by their Triple Eight stablemate Shane van Gisbergen, who is most likely to defend his 2016 12 Hour victory behind the wheel of a McLaren.

Van Gisbergen is now one of the hottest GT talents in the world, recently clinching the Blancplain Endurance series with the Garage59 team.

The quick Kiwi has also been a stand out performer at Daytona 24 Hours race the past two years, and also leads the 2016 Supercars championship heading into the Bathurst 1000.

While the Bathurst 1000 is still considered ‘The Great Race,’ the 12 Hour has grown exponentially in recent years following the move to GT3 spec cars, as well as boasting a stellar line up of local and international talents.

Next year’s instalment of the 12 Hour takes place from February 3-5.