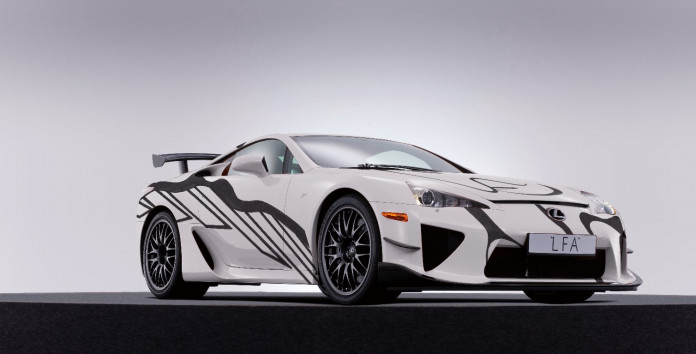 JAPANESE performance and luxury car maker Lexus will unveil a uniquely painted LFA this weekend to celebrate the debut of its RC F GT3 contender in the Total 24 Hours of Spa endurance race.

The reveal of the LFA Art Car also marks the tenth anniversary of the Lexus “F” performance brand and showcases the brand’s passion and dedication to creativity and design.

The bespoke livery of this one-off vehicle was designed by Portuguese artist Pedro Henriques, who transformed the super car’s exterior with a striking black-and-white theme.

His design unites the lines of the iconic Lexus LFA V10 super car with a flowing, organic pattern that embodies the feeling of movement and constant evolution.

Henriques said his inspiration was the idea of fluidity present in the contemporary life, where things are in constant movement and it’s hard to freeze anything.

“The lines in the drawings follow this feeling of going everywhere and never stopping; a progressive life. I hope to express a feeling where the car becomes a less defined shape, in constant mutation in its movement.”

The Emil Frey Lexus Racing team is competing with two Lexus RC F GT3 coupes in the 70th edition of the 24 Hours of Spa, the toughest race in the Blancpain GT Series championship.

The LFA Art Car will join the on-track parade tomorrow (Saturday) before the start of the main race.