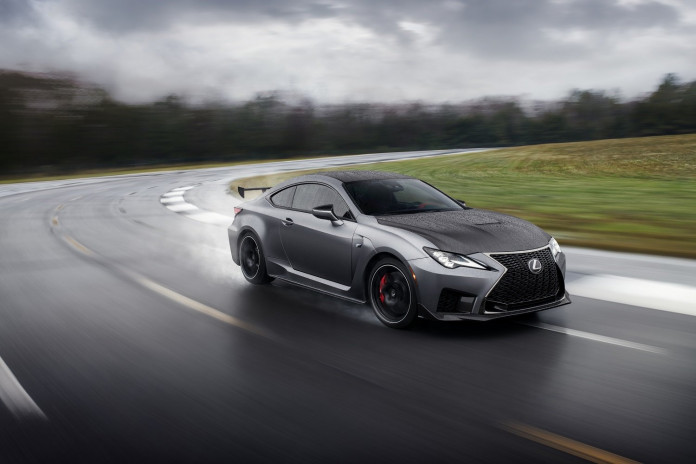 AT 5.10am tomorrow (Tuesday 15 January 2019) morning (AEDT), Lexus will unveil an all-new RC F Track Edition as part of an extensive update that boosts the performance and freshens the overall look of its flagship performance coupe.

The RC F Track Edition offers exclusive upgrades designed for hard-core enthusiasts, blending a serious performance car for the track with the luxury and craftsmanship expected of a Lexus.

Combined with a new launch control feature standard on every RC F, the Track Edition is targeting acceleration from 0-to-100km/h in around four seconds. This new variant is the latest milestone for the F performance brand that will continue to evolve.

“These models help further distinguish the F brand by offering fast, durable, highly capable performance cars that rely on a range of technologies to help make their performance accessible to drivers of all skill levels,” Sato-san said.

Lexus engineers have reduced the RC F’s weight without compromising the coupe’s sense of refinement and solidity, with changes including hollow rear axle-shafts, a smaller intake manifold and smaller air-conditioning compressor removing weight from the car.

Standard electronic launch control provides the ultimate in standing-start acceleration. With a push of the button on the console, the system automatically adjusts the traction and throttle control for maximum acceleration from a stop.

Additional performance gains are delivered by new Michelin Pilot Sport 4S tyres designed specifically for the RC F with a unique profile shape, tread pattern and rubber compound, with all these changes being made to both RC F variants.

The signature grille gains a lower lip opening that stretches across the bottom to create a visually shorter front fascia. New taillights integrate neatly into a reshaped bumper to give the RC F a cleaner, more chiseled appearance.

In the case of the Track Edition, developed with input from Lexus race teams in the Super GT and IMSA series, the new variant is designed to deliver exceptional performance that enthusiasts can easily exploit in a wide variety of conditions.

All aspects of the car were scrutinised for improvement, resulting in an uncompromised luxury performance coupe with the ability to impress both on and off the track, thanks to changes that include a unique carbon fibre front air dam.

A fixed rear wing, also made from carbon fibre, is lighter than the active spoiler offered on the standard RC F. The fixed wing also reduces drag and adds up to 26kg down force.

Every Track Edition model is upgraded with Brembo carbon-ceramic brake rotors that are lighter than their steel counterparts and better able to withstand the extreme heat cycling associated with performance driving.

They are surrounded by a set of lightweight 19-inch BBS forged alloy wheels that feature a design derived from the RC F GT3 race car. The wheels, brake rotors and calipers result in a significant 25kg reduction in un-sprung weight on the front of the car alone.

Additional weight was removed by specifying carbon fibre for the roof and bonnet along with switching to a carbon fibre partition behind the rear seats and a carbon bumper reinforcement.

Many of these carbon fibre pieces will be made on the same line that supplied the Lexus LFA during its two-year production run. A standard titanium muffler and tail pipes also helps the Track Edition shed weight.

Production of the updated Lexus RC F and the RC F Track Edition will start in the second quarter of 2019 and is expected to arrive in Australia in May. You can watch the live stream here.