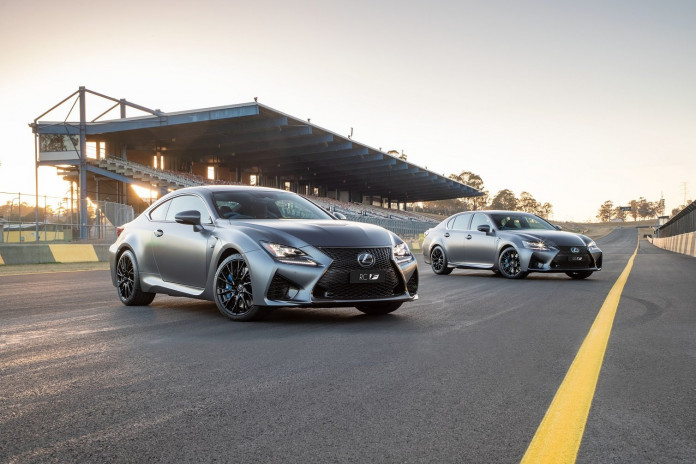 IT began some 10 years ago, with the IS F V8 sedan, and was followed by the legendary LFA supercar, before the launch of the V8-engined RC F and GS F in 2015 and 2016. Now Lexus is marking the anniversary of F with two limited edition models.

Other standard features shared by these cars include a torque vectoring differential for superior handling through corners, and Lexus Safety System+, which incorporates rear cross-traffic alert and blind-spot monitor among its suite of technologies.

“The letter F symbolises a series of Lexus cars that are designed and engineered to deliver a higher level of sporting style and driving reward,” Mr Thompson said.

“These rare and exclusive versions reinforce that F models are built for drivers to immerse themselves in pure driving pleasure and satisfying performance.”

The 10th anniversary RC F is based on the RC F Carbon Pack, equipping the car with a carbon fibre roof and active rear wing. It is priced from $151,929. The GS F features carbon-fibre lower grille surround and rear lip spoiler, and is priced from $155,940.

The limited-edition models will be available from Wednesday, September 5. Each model is fitted with a discreet metal plaque recording the car’s limited edition status.