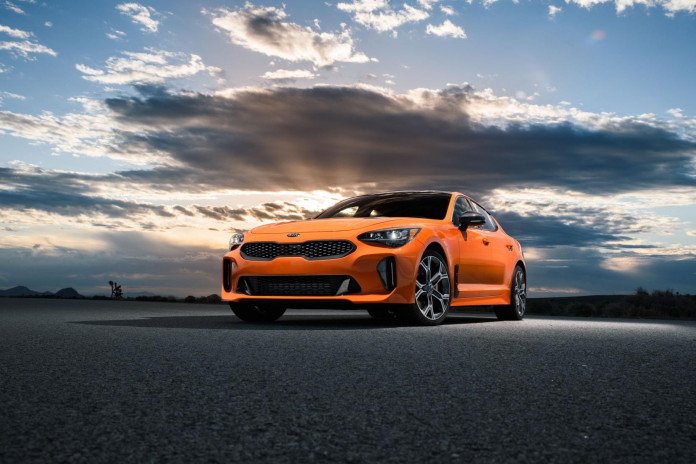 SINCE its debut nearly two years ago, the Kia Stinger has quickly become a crowd favourite, and at the New York International Auto Show, Kia Motors America gave driving purists yet another compelling reason to check out Kia’s highest performing sport sedan.

With sport-inspired styling elements including genuine carbon fibre parts and a splashy new colour that demands even more attention, the limited edition GTS is the one automotive enthusiasts will be lining up to drive.

A new AWD system has added things such as drift mode and dialed up rear bias to the American version of the Stinger, while it still maintains the 3.0-litre twin turbo V6 that punches out 272kW of power and 510Nm of torque.

Aside from what lies beneath, and the special Federation orange colour, the GTS also gets genuine carbon fibre parts that outline the signature tiger nose grille, side mirror caps and side vents, a GTS rear emblem and a Stinger emblem that replaces the Kia logo on the boot lid.

Inside, the Stinger GTS adds more premium materials befitting of a true driver’s car, including a steering wheel and centre console swathed in Alcantara and a premium headliner blanketed in suede-like Chamude.

As part of the GTS treatment, the limited edition fastback also gets a sunroof and a  720-watt Harman/Kardon premium audio system with QuantumLogic and Clari-Fi signal enhancing technology, and wireless phone charging.

Now yes, we know the AWD version of the Stinger is not available in Australia, but the RWD version is, and if we were taking bets, and we often do, we’d lay money the special edition orange paint and carbon fibre goodies will find their way onto an Aussie Kia Stinger.