It’s a truck Jim, but not as you know it 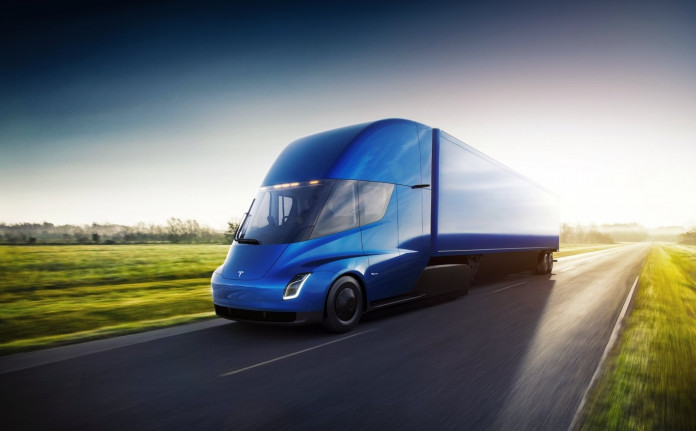 ELECTRIC vehicle manufacturer Tesla has weighed into the biggest game of all, launching its first ever Semi, boasting what Elon Musk says will be a far better experience for truck drivers, while increasing safety and significantly reducing the cost of cargo transport, thanks to unrivalled performance specifications.

Without a trailer, the Tesla Semi achieves 0-100km/h in five seconds (those are Tesla Model S and Model X kind of numbers), compared to 15 seconds in a comparable diesel truck. It does 0-100km/h in 20 seconds with a full 36.5 tonne load, a task that takes a diesel truck about a minute.

Most notably for truck drivers and other travellers on the road, it climbs 5 percent grades at a steady 105km/h, whereas a diesel truck maxes out at 72km/h on a 5 percent grade. The Tesla Semi requires no shifting or clutching for smooth acceleration and deceleration, and its regenerative braking recovers 98% of kinetic energy to the battery, giving it a basically infinite brake life.

Overall, the Semi is more responsive, covers more miles than a diesel truck in the same amount of time, and more safely integrates with passenger car traffic. Impressively, the Tesla Semi can also travel in a convoy, where one or several Semi trucks will be able to autonomously follow a lead Semi.

Unlike other trucks, the Semi’s cabin is designed specifically around the driver, featuring unobstructed stairs for easier entry and exit, full standing room inside, and a centered driver position for optimal visibility. Two touchscreen displays positioned symmetrically on both sides of the driver provide easy access to navigation, blind spot monitoring and electronic data logging.

Megachargers, a new high-speed DC charging solution, will add about 620 kilometres in 30 minutes and can be installed at origin or destination points and along heavily trafficked routes, enabling recharging during loading, unloading, and driver breaks.

The Tesla Semi’s all-electric architecture is designed to have a higher safety standard than any other heavy-duty truck on the market, with a reinforced battery that shields the Semi from impact and gives it an exceptionally low centre of gravity. Its windshield is made of impact resistant glass.

Jackknifing is prevented due to the Semi’s on board sensors that detect instability and react with positive or negative torque to each wheel while independently actuating all brakes. The surround cameras aid object detection and minimise blind spots, automatically alerting the driver to safety hazards and obstacles.

For truck companies in Australia who might consider the Tesla Semi, the biggest immediate cost-advantage will come from savings in energy costs: fully loaded, the Tesla Semi consumes less than three kilowatt-hours of energy per kilometre and is capable of 800 kilometres, fully loaded.

It’s estimated owners could save as much as $200,000 in fuel costs alone over its 1.6 million kilometre battery and engine life cycle.

Reservations for the Tesla Semi can be made for just over $6,500 Australian dollars, with production commencing in 2019. An Australian launch and release date, and final local pricing is yet to be determined.