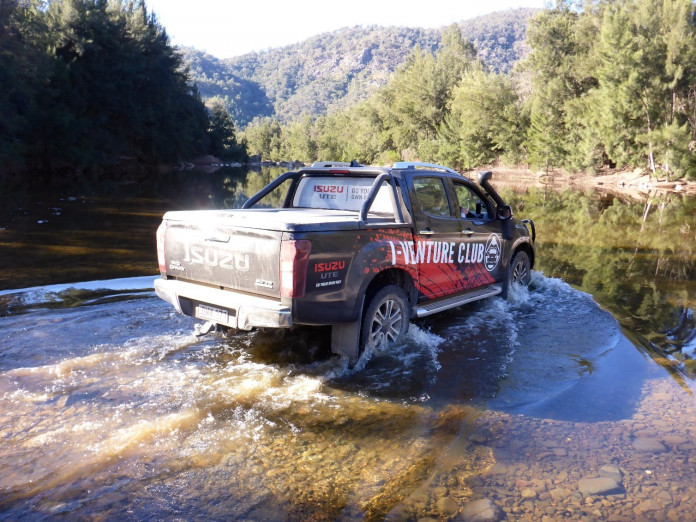 DRIVER experiences aren’t a new concept. Porsche, BMW, Jaguar, Volkswagen, Audi – the list goes on – all run track days around the country as a selling point for their performance cars, or to encourage existing customers to upgrade.

Among them all, there is one driving experience that stands out. You won’t find it at a track either. In fact, it’s point of difference is that it teaches you how to go off the beaten track. It is of course Isuzu Ute’s I-Venture club.

It’s a perfect synergy for the brand. Isuzu Ute has only two vehicles in its range: the D-Max ute and M-UX SUV, of which the vast majority of sales are 4×4 variants. The brand’s whole marketing campaign is based on the notion of ‘going your own way.’

The I-Venture club is run as one-day events around the country, as well as the odd multi-day trip here and there, with a manageable 12 spots and an attractive price point of $300.

It might seem a bit steep, but for that price you get two people to a car and the expert advice of Adventure 4×4’s David Wilson, another member of his team, and an Isuzu Ute staff member.

The day starts with a long session of theory. A crash course in 4x4s: differentials, high and low gears, tyre structure, load ratings, pressures. Sure it sounds boring, but even those who were more knowledgeable in the room still came away with something from it.

It also helps that David Wilson is incredibly engaging and makes even the more tedious parts of the day enjoyable. Be warned though, he will make fun of the unsuspecting. It’s all in good humour though.

Then comes the fun stuff, getting behind the wheel. A quick radio check with the call sign “David Wilson is a wanker” and the convoy is off. Oh, and partners who come along thinking they will just be along for the ride, think again.

Driver changes are not just encouraged – they are borderline mandatory. The premise behind driver swaps is simple. Don’t teach the primary driver, teach both drivers about all situations.

Wilson has an uncanny knack of being able to identify the least confident member of the group, and having them leave with a new found exuberance.

In the case of Exhaust Notes Australia’s I-Venture experience, it was the an older lady who had no desire to drive throughout the day. She was the one who was ‘volunteered’ to demonstrate how to do a water crossing.

The end result? Sheer excitement about doing something she never thought she would.

The location lends itself to an array of different skills. Line selection, river crossing, sand driving and rocky terrain. A hot tip though, don’t Google ‘River Island’ to research it first. It may just lend itself a rude surprise if you dig deep enough.

During our session, Isuzu received feedback that the day isn’t long enough. That’s definitely the case. There is a lot to take in and you will do a fair bit of 4×4’ing through the day, but it only scratches the surface.

However, Isuzu has now introduced longer trips as well for those that really get the bug. There’s also a reason the I-Venture club has a fair whack of repeat customers, and even some who travel interstate to sample the program.

The I-Venture day presents incredible value and gives new and old owners a much better appreciation for the capabilities and limitations of the D-MAX and M-UX range. But is it better than a track day? Oh, it’s a close call. Definitely a close call.