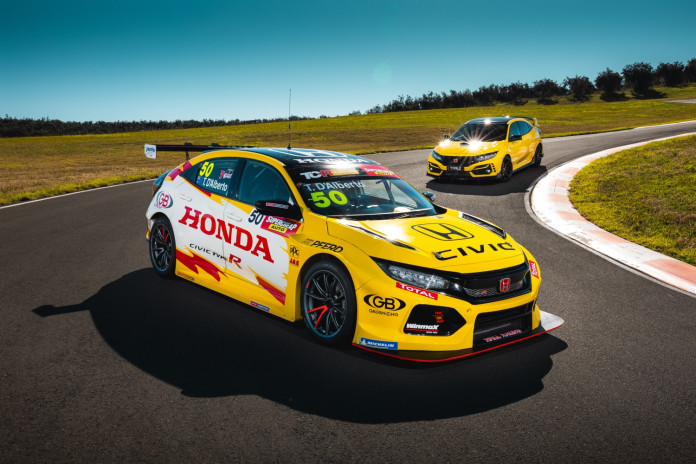 The popular ‘Racing Blue’ colour scheme that has adorned D’Alberto’s #50 Honda Civic Type R TCR this year has been replaced with a striking ‘Sunlight Yellow’ livery, taking inspiration from the new paint colour of the Civic Type R Limited Edition.

Unveiled as part of a customer handover event at the Peter Warren Honda dealership in Warwick Farm, the new TCR livery will been seen on track for the first time at Queensland’s Morgan Park Raceway in August, for round five of the TCR Australia Series.

Just 20 examples of the Civic Type R Limited Edition have been produced for Australia, from a global production run of only 1,020 vehicles.

Due to the overwhelming demand for the small allocation, the Australian vehicles were secured by customers via a lottery system, with three of the special vehicles delivered to their new owners in Sydney as part of the event.

Developed with track performance as its core focus, the new Civic Type R Limited Edition has been designed and engineered to be the most dynamic front-wheel drive hatchback available.

Building on the acclaimed performance capabilities of the standard Civic Type R with new lightweight components, the Limited Edition is the purest expression of the iconic Civic ever made.

The bold Sunlight Yellow colour is exclusive to the special variant, reflecting the heritage of Type R and ensuring it stands out as a unique proposition in the performance hatchback segment.

D’Alberto heads to the next round of the TCR Australia Series with good speed in hand, having qualified and raced with pace at the last event at Sydney Motorsport Park. After four rounds, he currently sits ninth in the series, within striking distance of the top five.

For Victorian race fans, they’ll be able to get up close to the new-look car at Sandown International Raceway on September 17-19.

“We all loved the blue look on our Honda Civic Type R TCR, but the new yellow livery is something else,” D’Alberto said.

“It’s really cool to celebrate the arrival of the Civic Type R Limited Edition by using my race car to showcase the new model. It shows just how much Honda values its performance and racing heritage,” the Wall Racing driver added.

“The engineers have done a fantastic job fine-tuning the Limited Edition model in pursuit of lightweight and speed – they’ve taken the Civic Type R to the next level and brought it even closer to my TCR race car,” he added.

“I hope the colour change and ‘Limited Edition’ inspired livery will also give my TCR car a lift when we get on track at Morgan Park Raceway in August for the next round of TCR Australia Series.”