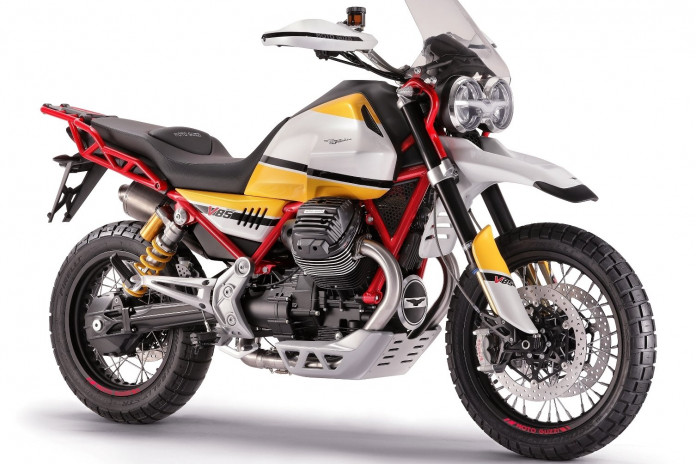 PAYING homage to its rich tradition of adventure motorcycles and with one eye on the future, Moto Guzzi has unveiled the 2018 V85, powered by a new 60kW V-twin, representing the first of many new bikes to be built on this platform.

The Italian brand has been producing bikes since 1921 in Mandello del Lario, combining the best technologies and the most valuable elements of Italian manufacturing and style. The next goal for the marque is to celebrate its 2021 centenary with an ever-expanding range of motorcycles.

The V85 is a step to the future with features that place it between the classic V7 and V9 family and the 1400 large cruisers, covering the gap left by the Moto Guzzi Stelvio. It is a motorcycle that has travel in its blood and the unmistakable spirit of Moto Guzzi.

The V85 comes from the best tradition of Moto Guzzi, built out of authenticity, which is the guiding principle of the factory in Mandello. The engine boasts a significant increase in power and guarantees rideability and fun.

It is dedicated to travelling in its purest form, recalling the epic rally raids of the 1980s, a point of reference from which it inherits style, charm and thus emotion, giving it a whole host of tradition.

That tradition aside though, it has been designed to take on everyday routes and long-distance routes, using the most cutting edge technology available.

An Australian release date for the 850cc 2018 Moto Guzzi V85 is yet to be announced.