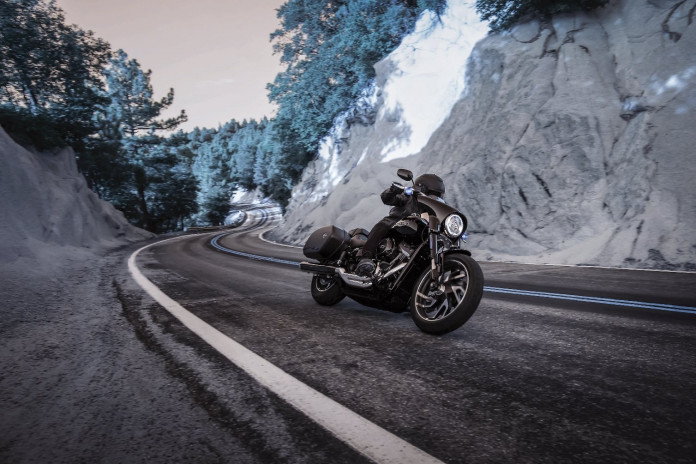 IT’S the cruiser, commuter and tourer, all rolled into one, and powered by a powerful Milwaukee-Eight 107 V-Twin engine. What makes the 2018 Harley-Davidson Sport Glide so different and so versatile is the detachable fairing and removable panniers.

As the latest edition to the new Softail range, it features full LED lighting and electronic cruise control, and is an engaging combination of technology and style.  Designed to be lightweight and stiff, the new Softail chassis underpinning the Sport Glide delivers agility and handling performance.

The Sport Glide project offered Harley-Davidson a unique opportunity to utilise a directional wheel, the first of its style to come out of the Harley-Davidson factory on a non-CVO model. As a result the spokes sweep from the hub to the rim to create a sense of motion even when the Sport Glide is parked.

The fairing is shaped to deflect wind away from the rider’s chest while leaving his or her head in a clean stream of air. It’s secured to the fork tubes with quick-release clamps, making removal or installation fast and easy. Riders seeking even more wind protection can exchange the factory windshield for a larger option.

The new rigid (and lockable) panniers feature a sleek clam shell design. They’re easy to load and unload and can be opened with one hand by a seated rider; a damping device allows the lids to open smoothly. The bags can also be removed in seconds with an internal quick-release mechanism, leaving behind barely visible mounting points.

The blacked-out Milwaukee-Eight 107 power train brings a new level of performance and sophistication to Harley-Davidson Big Twin cruisers, including the new Sport Glide. Dual counter-balancers are tuned to eliminate primary vibration at idle while permitting some engine character to reach the rider at speed.

The engine is rigid-mounted in the frame, which stiffens the chassis and connects the rider more directly to the power train. Precision oil cooling around the hottest areas of the cylinder heads further enhances rider and passenger comfort.

The 2018 Harley-Davidson Sport Glide is priced from $27,750, and will be available in Harley-Davidson dealerships soon. It comes in three solid colours: Vivid Black, Twisted Cherry and Silver Fortune, and joins the new Softail and customised Touring model line-ups, along with a range of 115th Anniversary model variants as part of the 2018 model range.