THE flying Kiwi, Shane Van Gisbergen, has continued his form from the Pirtek Enduro Cup, with the Red Bull Racing Australia driver adding another prestigious trophy to the cabinet at Pukekohe Raceway, becoming the first local to take home the Jason Richards Memorial trophy in the Supercars annual trip to New Zealand.

Van Gisbergen’s successful campaign over the four 100 kilometre races of the ITM Auckland SuperSprint, resulted in two pole positions, one race win and three other podium results, but the weekend wasn’t without issue for “The Giz”.

A failed passing move by team mate and championship rival Jamie Whincup sent the pair down the order in the third race of the weekend (both drivers brushed off the incident post race).

While Van Gisbergen put in a stunning drive to recover to third in the race (his worst result of the weekend), team mate Whincup earned a drive through penalty for his part in the incident, putting him a lap down, to finish second last in the short sprint race (and take away his chance of winning the weekend, despite two firsts, and a second).

Outside of the Red Bull Racing Australia duo, Bottle-O Racing’s Mark Winterbottom walked away with the win in the third race, while Scott Pye (DJR Team Penske), Scott McLaughlin (Wilson Security Racing GRM) and Chaz Mostert (Supercheap Auto Racing) all made an appearance on the podium during the course of the weekend.

“I choked a few tears back knowing I had won the trophy. I am the first Kiwi to do so, I have such fond memories of JR (Jason Richards), and to do it in front of my home crowd was pretty special,” Van Gisbergen said post event.

“We increased the championship lead, which is a bonus, but we have a fair bit of a break between here and Homebush, which is boring, to be honest. The first race today had its moments, a few mistakes made, but I made up for it and managed to grab third, the car was great. I am in a pretty special place with the car and the team at the moment, I am very lucky.”

The solid weekend for the Red Bull backed Kiwi boosted his championship points lead. He now holds a healthy 197 point lead over Whincup with just one round left in the series. The Virgin Australia Supercars Championship continues in four weeks with the final round at Sydney Olympic Park in Homebush.

Rhys Vandersyde is a freelance photographer and media professional, based in Sydney. A specialist in motor sport and automotive imagery, his past work includes Formula 1, the World Rally Championship, Supercars and GT racing across Australia and the Asia-Pacific region. All images have been supplied by Rhys Vandersyde and Rhys Vandersyde | vandersyde.com. 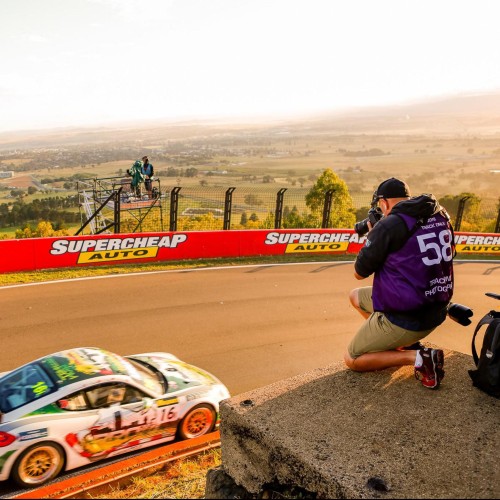 Rhys Vandersydehttp://www.vandersyde.com.au
Rhys Vandersyde is a freelance photographer, writer and media professional, based in Sydney. A specialist in motor sport and automotive imagery, his past work includes Formula 1, the World Rally Championship, Supercars and GT racing across Australia and the Asia-Pacific region.