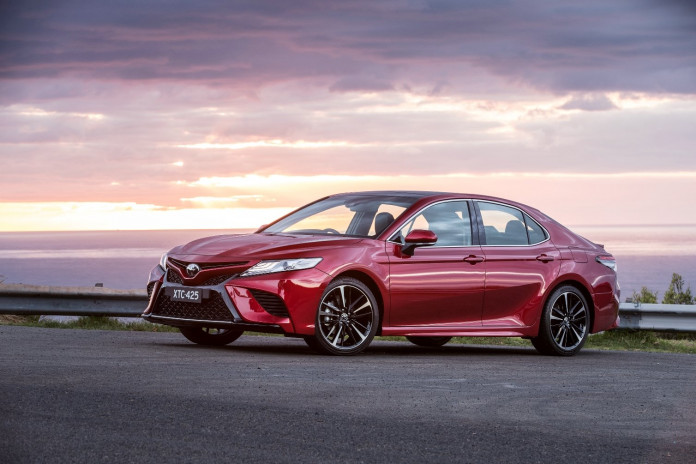 The new Camry has undergone a dramatic redesign from bumper to bumper that results in a premium, high-quality car, focused on performance and technology. The latest Camry is built on a new platform that underpins more emotional styling, and brings new power trains with higher power and better fuel economy.

A revamped chassis that sharpens driving dynamics and advanced new safety technologies also features in the eighth-generation Camry, and is the first time in 30 years that Toyota has offered a fully imported Camry range to the Australian market.

The Camry is the first sedan to adopt Toyota’s New Global Architecture (TNGA), which has transformed the way Toyota vehicles are designed, engineered and packaged, and enables greater freedom in design, resulting in a more athletic profile with a lower roof and bonnet, a better driving position and improved dynamics due to its lower centre of gravity and greater torsional rigidity.

Two new power trains are offered – a redesigned hybrid system with a new direct-injection four-cylinder engine that delivers more power, flexibility and efficiency, and a stunning new V6 engine with direct-injection technology and an eight-speed transmission.

Toyota has adopted new grade names: Ascent and Ascent Sport (4-cylinder petrol or hybrid), SX (4-cylinder or V6) and SL (all three power trains). Prices have been reduced for six of the nine new Camry variants while increases on the other three are outweighed by additional features.

For the new hybrid power train, with combined power output rising to 160kW, prices have been improved compared with the petrol variants and the market. The Camry SX and SL, with the new 224kW, 362Nm V6 engine are just $4,000 more than their four-cylinder siblings.