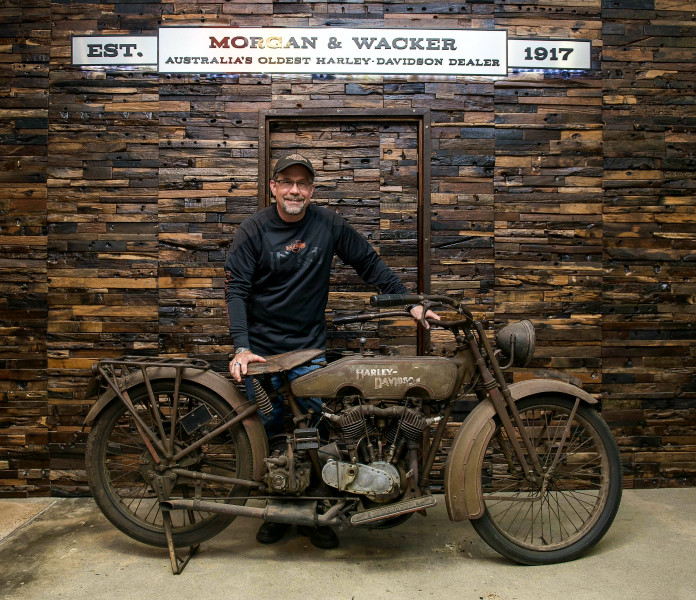 AS the great grandson of Harley-Davidson co-founder William A Davidson, Bill Davidson is a member of riding royalty.

The President of the Harley-Davidson Museum in Milwaukee, Bill was in the country just recently to celebrate 100 Years of Harley-Davidson in Australia. We sat down with him to get an insight into the family behind the legend.

What’s your earliest Harley-Davidson memory? As a kid at holiday parties and family gatherings, I always intrigued by my grandfather, father and uncle having conversations about the company, my ears would perk up. But I didn’t realise the connection – that my family name was literally on the gas tank. I grew up like any other kid, riding bikes and playing football. It was only when I was in high-school and thinking about what I wanted to do in life that I started to think WOW, this is pretty special.

How old were you when you learnt to ride? My mum and dad took to me to local park to teach me how to ride when I was 16. It was on a Harley-Davidson M50 and that experience is one I’ll never forget it. There’s something really magical about the first time you ride – that feeling of personal freedom – when you have the throttle and the handlebars and you’re in control of a two-wheel vehicle, it’s a phenomenal experience. And I’ve been riding ever since.

Which word best describes what Harley-Davidson stands for? FREEDOM!

Do you think that’s why the brand resonates so well in a country like Australia? For sure, the wide open spaces and sense of adventure here is a match made in heaven for Harley-Davidson. Our purpose is to fufill dreams of personal freedom. When you throw a leg over your bike and set off on an adventure, the stresses of life fade away and your senses come alive.

Harley-Davidson has a legion of loyal fans – how do the Aussie enthusiasts compare to others around the world? In Australia, there’s a real brotherhood and sisterhood behind the brand – which is amazing. It’s such a thrill to travel to different parts of the word, to experience the countryside – the people, the cultures. Australia is a phenomenal country, with wonderful people that makes it feels like home to me. The reception has been terrific and I’m always honoured by that.

What was it like for you to visit the birthpace of Harley-Davidson in Australia, Morgan & Wacker in Brisbane? People may not realise, Harley-Davidson started operations in Australia just 14 years after the US. When I arrived at the Morgan & Wacker dealership during this trip and saw the 1917 V Twin, I felt like it was magnetic and I was drawn to it. I had to touch it and have my picture taken with it. I felt emotional to see bikes that my relatives were responsible for designing, engineering and manufacturing. Kowning that this exact bike was one of their babies in Milwaukee, and here it is one hundred years later and half-way around the world in Brisbane Australia.

How many Harley-Davidson bikes do you currently have in your garage? At present, there’s 15. I’ve been an avid collector my entire life, it’s almost time to add on to my garage space I think.

What can fans of Harley-Davidson expect in the next 100 years? I don’t have a crystal ball, but I can guarantee you that Harley-Davidson will be alive and well. Our philosophy around form following function, both reporting to emotion around look, sound and feel will be a continued focus in designing and delivering bikes that put a smile on our customers faces. It’s going to be an awesome ride that’s for sure!