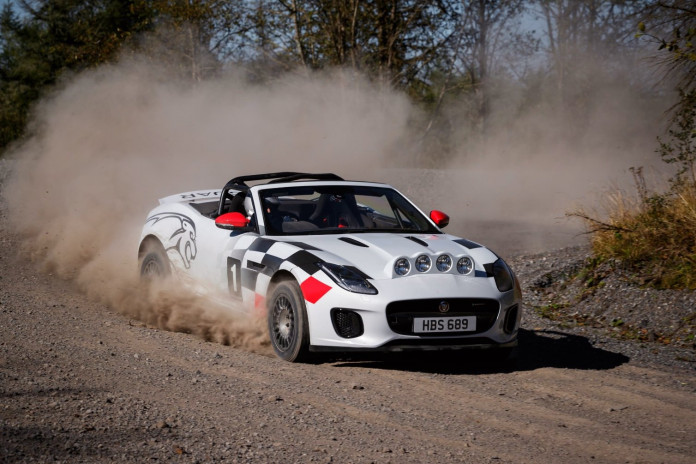 The one-off F-TYPE rally cars also pay homage to the legendary Jaguar XK 120 registered ‘NUB 120’ which, in the early 1950s in the hands of Ian Appleyard, completed three consecutive Alpine Rallies without incurring a single penalty point, winning the RAC and Tulip.

With motor sport-spec wheels and tyres specifically for use on gravel, a limited-slip differential improves power delivery on loose surfaces while a hydraulic handbrake helps drivers tackle hairpin bends.

The celebratory models were put through their paces at Walters Arena rally stage, South Wales, to demonstrate their performance credentials and will now attend a series of Jaguar events over the next few months.

The rally cars’ livery takes design inspiration from the new F-TYPE Chequered Flag Limited Edition, which features a range of subtle exterior visual enhancements, including unique 20-inch Gloss Black wheels with a Diamond Turned finish and a Black Contrast roof on the Coupé.

The Jaguar F-TYPE Chequered Flag Limited Edition is available from $139 650 plus on-roads (2.0 Coupe).