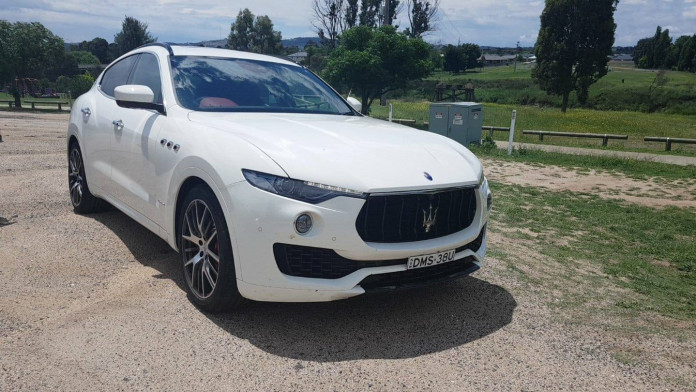 A few years ago, that concept would have been frowned upon, even laughed at, but in recent weeks we’ve seen the unveiling of the Lamborghini Urus, and rumours abound Ferrari has its own version on the way.

There’s also been the somewhat seriously unattractive Bentley Bentayga in that mix, and Alfa Romeo has recently launched a stable mate, the Stelvio, to the vehicle that seems to have been the benchmark to it all, the Maserati Levante.

On the back of the success of the diesel powered Levante, launched earlier this year, the company has gone one better, introducing petrol power, and a twin-turbocharged 321kW V6 power plant, built by Ferrari.

Has the world caught Australia’s obsession with SUV’s and could the Levante become the new mainstay of the Maserati brand for years to come? Both are quite seriously possible, especially with the addition of a range of new safety features and new model options.

Pushing 580Nm of torque, the new Levante S is capable of hitting 100km/h in 5.2 seconds, and a top speed of 264km/h – all through an engine and transmission combination that is fantastic to drive.

While certainly looking the part as a performance luxury SUV, the Levante S, and its three model variants that includes the GranSport and the GranLusso, sounds incredible on the outside. That Ferrari powered growl grabs attention, even at idle, and at acceleration, simply screams ‘look at me’.

The unique luxury in the GranLusso is exemplified by the standard Zegna silk upholstery interior, which is accessed through, new for 2018, soft closing doors that gently and silently pull themselves shut when required.

Maserati has assured its customers that whilst the Levante S is jam packed with standard features, the two new variants do not diminish in any way the ability of owners to carefully craft a personalised Maserati experience.

Optional extras include no less than seven different alloy wheels, five of which are new for 2018. There are five different interior trim choices, two different steering wheels and four different colours for the brake callipers amongst the plethora of choices.

On the outside, there’s no denying the Levante S is a Maserati, from the trademark grille to the blade like headlights, to the three signature vents on either side of the front guards, it’s all here.

Unfortunately these vents are purely for show and a possible missed opportunity to extract some excess brake heat.

All versions of Levante and Levante S come with the same eight-speed ZF transmission, Q4 all-wheel drive and a standard mechanical limited slip differential. Maserati told us the all-wheel drive system can alter front/rear torque split in 150 milliseconds, and it really is that quick.

During our drive day with the new Levante S (we drove the GranSport), we were able to get a feel for the new model, mess about with the paddle shifters (which are a little too big. Trust us when we say too big, we got stuck in a downpour and struggled to operate the rear window wipers because of them).

The increase is horsepower over the diesel that the V6 brings means the Levante S has been given an upgraded brake package, with 380mm ventilated discs with twin piston callipers up front and 330mm ventilated and drilled discs with single pistons at the rear.

The air suspension, steering and chassis have also been tuned and upgraded to push the Levante though corners like a rear wheel drive sports car, making it feel solidly planted, secure and controllable.

There are now six driving modes; Normal, Manual, two Sport modes, I.C.E (Increased Control and Efficiency), and two Off Road settings. Despite its quickness in any mode, there’s a distinct lack of engine and turbo noise inside the cabin when you put your foot down, which takes away from the experience, removing some of the thrill of the drive.

The steering has seen Maserati move from a traditional hydraulic system, to an all new electric setup, which brings all of the new driver safety features, including an advanced driver alert system, highway assist, lane keep assist, active blind spot assist, traffic sign recognition and a 360-degree camera.

These all work very well, except the lane keep assist system, which we found to be slow to respond, and aggressive when it provided lane correction.

Inside, the centre console storage under the armrest is massive, you can put two regular sized bottles in it standing up. There’s also a storage area in front of the shifter, two more cup holders up front, another two in the back, and bottle holders in all the doors. The boot isn’t the biggest or the smallest in its class, with a capacity of 580 litres.

The driver and front passenger seating positions are fantastic, but the rear seat legroom is where the Levante loses some points. If you’re over 180cm tall, or 6ft in the old scale, you’ll struggle to feel comfortable in back seat for a couple of reasons – rear leg and head room are both average at best.

The base model Levante S lists for $169,990 and the base model turbo diesel version at $139,990. Standard features include a leather interior, heated and po6wer adjustable front seats, an 8.4-inch touch screen with surround view camera, SatNav, Apple CarPlay and Andriod Auto, dual-zone climate control, panoramic sunroof, power tailgate, bi-xenon headlights and 20-inch alloy wheels. The diesel misses out on the sunroof and gets smaller wheels.

The Levante S GranLusso and the S GranSport both list for $179,990. The packages add an extra $20,000 to the list price of the turbo diesel, and the Levante S GranSport we tested was kitted out with 21-inch rims, a blacked out grille, rear spoiler, Harman/Kardon 14-speaker stereo, sports steering wheel, fine-grain extended leather upholstery, sports front seats and sports pedals.

None of it makes the Levante S go any faster, but it looks sure good. The only feature in this extensive list we found disappointing was the sound system. Whilst the clarity of the speakers was excellent, it lacked punch in the bass department. You should be able to hear and feel the kick of a bass drum or the babble of a bass guitar.

All is not lost on that front however, and for those demanding the ultimate acoustics in their Maserati Levante, there is an option for the Bowers & Wilkins Surround Sound system, which has been designed by the same engineers responsible for the British brand’s 800 Series Diamond speakers.

The optional system’s 17 speakers have been strategically incorporated into the car’s architecture to ensure the best possible acoustics, so that everyone on board benefits from a completely immersive audio experience.