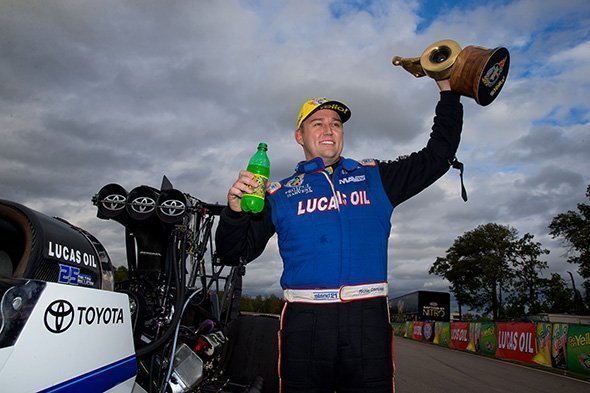 That won’t be the case this time, as Crampton arrives in his adopted home town with four victories on his 2015 résumé and a lofty third-place ranking in the Mello Yello Top Fuel championship points.

Despite his credentials, the Adelaide raised racer said he’s not underestimating the task ahead.

“I still feel like we have a lot to prove. There are just too many great drivers and strong teams in this category to have any kind of swagger,” Crampton said.

“You have to prove yourself every week, and we’re going into this race with the same mindset as we did a year ago.

“The U.S. Nationals is the single biggest race on the schedule, the Bathurst 1000 of our series, and the prestige of winning it is unparalleled. We did it once, and that will stay with us forever. Now we will try to double up!”

Crampton headed into drag racing’s longest running and most prestigious event last year with one win to his name, breaking through for his maiden victory at Englishtown New Jersey.

This year, he returns to Lucas Oil Raceway tied with Antron Brown for the most wins this season with four, at Las Vegas, Bristol, Topeka and Brainerd.

“We feel good about our performance to date but Top Fuel keeps you humble. You can be on top of the world one day and knocked to your knees the next.” Crampton said.

“Our mantra all year has been to be consistent. It’s extremely tough to do week after week because the weather is constantly changing, parts fail, and each track is different.

“I think everyone will agree that consistency has won more championships than pure luck, so we’ll continue down that path the best we can.”

The U.S. Nationals takes places this weekend, with qualifying runs on Saturday and Sunday, and eliminations on Monday.