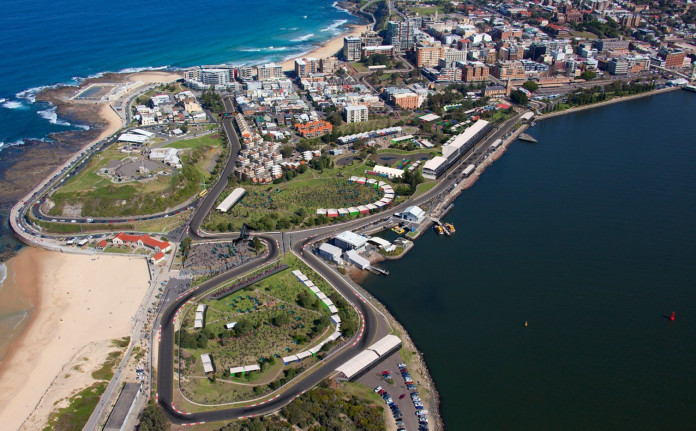 SUPERCARS will hit the streets of Newcastle from next year with a five year deal confirmed today by NSW Premier Mike Baird and Supercars CEO James Warburton.

Newcastle will replace the lacklustre Homebush street circuit as the final round of the Virgin Australia Supercars Championship with what looks to be an exciting loop around the foreshore and iconic Nobby’s Head precinct.

While the Sydney Olympic Park event showed promise in its inaugural year back in 2009, the event has dwindled to a lifeless and poorly supported event in recent years.

Exhaust Notes Australia believes the Coal City is more in line with Supercars’ core following and the move to a regional NSW event will reinvigorate the series finale – a view shared by NSW Premier Mike Baird.

“The Hunter has thousands of Supercars fans who now have an event to call their own,” Mr Baird said.

“The Coates Hire Newcastle 500 will be the first Supercars race ever held in Newcastle and is another major event secured for Regional NSW. It’s a picturesque course that takes in some of the city’s best landmarks, including Nobby’s Beach and Fort Scratchley.

“The race is expected to inject more than $57 million to the Hunter region over the next five years, and attract 81,000 visitors from around NSW,” he added.

The event has major backing from Destination NSW and Newcastle City Council and naming rights sponsorship from series partner Coates Hire. While it is listed as a 500km event, it is unconfirmed as to whether it will follow a three race or two race format.

According to Supercars CEO Warburton, the new venue will be a fitting finale to the 2017 series.

“The Coates Hire Newcastle 500 will be a spectacular event that will showcase Newcastle to a huge national and international audience and be a fitting finale to the Virgin Australia Supercars Championship,” he said.

“I want to thank Premier Baird, Minister Ayres, Destination NSW CEO Sandra Chipchase, Newcastle City Council and Coates Hire for their support to help create what will be an unforgettable event for Newcastle.”

Based on the success of the regional Townsville event, which is among the best events on the Supercars calendar, it is the view of Exhaust Notes Australia that the move away from the most fickle market in the country to a secondary city of the state will generate more patronage and atmosphere.

However, with the closure of Oran Park, NSW lacks permanent facilities for motorsport and driver training (other than the always booked out Sydney Motorsport Park). We can only hope that the NSW government and Supercars reinvests some of that projected $57 million into facilities such as CASAR Park on the Central Coast and the Shoalhaven motor sport precinct.

While Supercars may draw the crowds and be able to justify one off events on street circuits, the fact remains that 99 per cent of Australian motorsport is club level based, which requires investment in permanent facilities.

The confirmation of the Newcastle 500 is a win for the region and the fans – here’s hoping it results in a victory for the whole sport in the long term.