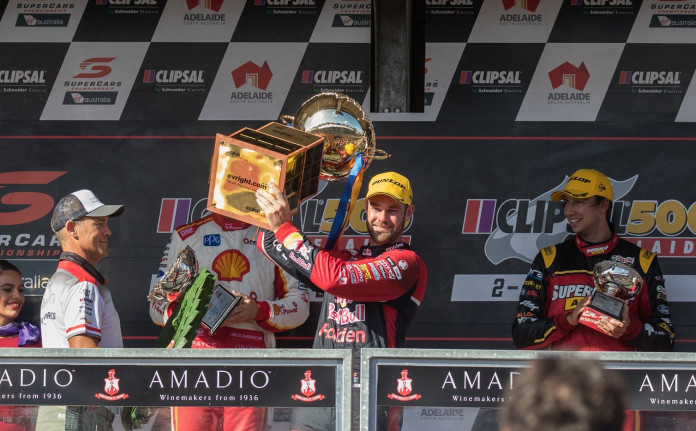 A late mistake for DJR Team Penske’s Scott McLaughlin has gifted Shane van Gisbergen back-too-back victories at the season-opening Clipsal 500, and a clean sweep over every session of the weekend.

McLaughlin’s lead was whittled away in the dying stages of the race, and with just a handful of laps to go, he locked his rear brakes on approach to the Turn 9 hairpin, handing van Gisbergen the win.

The Red Bull Holden Racing Team driver also racks up another milestone for Holden, with today’s victory the 100th win for a VF Commodore since its introduction, while also making it undefeated on the streets of Adelaide – winning all 13 races at Clipsal since 2013.

“What a huge weekend, we all worked so hard. It’s a great start to the year, everyone has pushed through the off-season and everyone really deserves this result,” van Gisbergen said.

“It was a hard race, I had some fun battles. I struggled at the start, lost some time, it was all happening. Coming into the weekend we had a fair few unknowns, but it’s great to know that we know how the car performs, we know the car is fast.

“We cracked the big 300 podiums for Triple Eight today as well, which is an awesome milestone for the team. We can really head into the season knowing we gave the opener our all.”

While the Supercars are next on track at the end of the month for the Australian Grand Prix, it’s not until April when the championship resumes at Tasmania’s Symmons Plains.