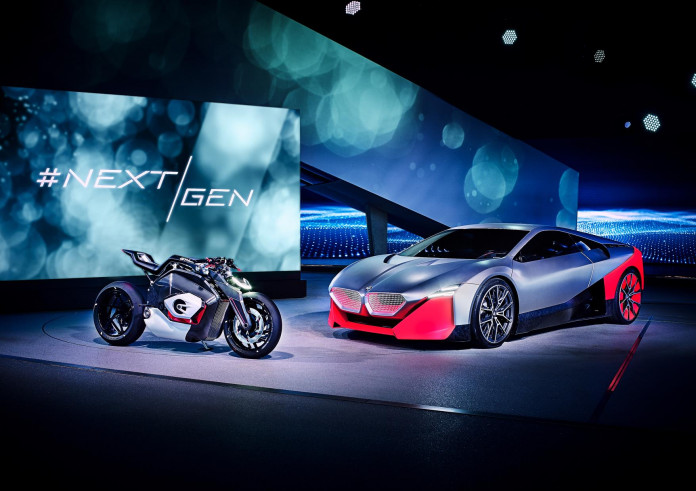 BMW has used the NextGen showcase in Germany to reveal not one, but two future concepts, the Vision M Next road car, and the Vision DC Roadster electric motorcycle as part of its own in-house future technologies trade show.

The striking Vision DC Roadster is a study in what would happen if you took the instantly recognisable 2-cylinder boxer engine, a key element of BMW Motorrad’s identity for more than 90 years, and emptied its insides out, replacing the contents with a battery.

The question arises as to what a BMW motorcycle might look like that is electrically powered? And how would it reveal itself at first sight to be a BMW? One possible answer is this highly emotional naked bike with electric drive.

“The boxer engine is the heart of BMW Motorrad – an absolute stalwart of its character. But BMW Motorrad stands for visionary zero-emissions vehicle concepts, too,” explains Edgar Heinrich, head of design at BMW Motorrad.

“In view of this, one question that arises is: what would happen if we were to replace the boxer engine with an electric motor and the required battery? The Vision Bike shows how we’re able to retain the identity and iconic appearance of BMW Motorrad in distinctive form while at the same time presenting an exciting new type of riding pleasure,” he says.

“After all: anyone who’s ever tried it out in practice knows very well that riding on two wheels is just as exciting when its electrically powered! The high level of torque right at set-off makes for breath-taking acceleration,” Heinrich adds.

“This almost brutal power delivery creates a whole new experience of dynamic performance. And the BMW Motorrad Vision DC Roadster puts a face to this experience.”

The flip-side of the electric bike is the BMW Vision M NEXT, a future version of the BMW M, where drivers will be able to choose whether they wish to be driven or do the driving themselves.

With the Vision M NEXT, BMW is revealing its take on how driving pleasure might look in future for those who enjoy taking the wheel themselves. It offers a foretaste of the BMW M brand’s electrified future by placing the focus squarely on the actively engaged driver.

Intelligent technologies on board provide comprehensive yet carefully targeted assistance to turn them into the ultimate driver, while the actual driving experience offers the choice between electric all-wheel drive and pure rear-wheel drive.

The driver can choose either all-electric propulsion or the power of a turbocharged four-cylinder petrol engine. System output of 441kW produces a top speed of 300km/h and a 0-100km/h sprint time of 3.0 seconds.

It looks the part too; the Vision M NEXT drawing inspiration from the iconic BMW Turbo and groundbreaking BMW i8 plug-in hybrid, adopting a future focused design including the low-slung, wedge-shaped silhouette, gull-wing doors and striking colour scheme.

For the record, the front and rear ends are finished in the matte-neon shade Thrilling Orange, producing a vivid contrast against the exterior’s otherwise silk-matte Cast Silver metallic paintwork.