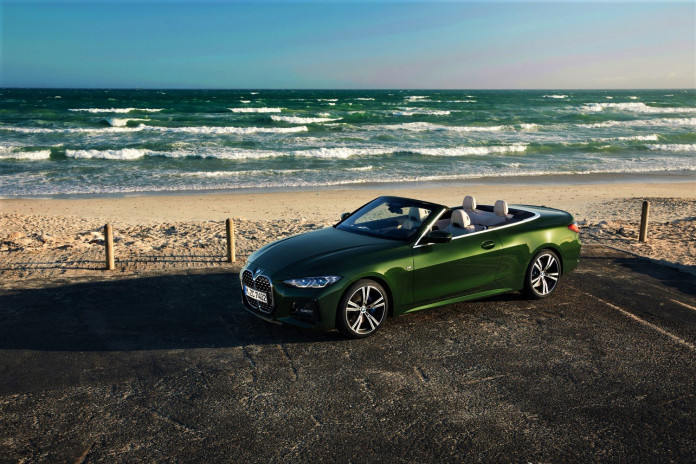 BMW will launch the stylish new 4 Series Convertible early next year, with the open-top variant of the recently launched 4 Series Coupé sporting a wide array of features and a high level of standard luxury specification.

Much like its hard topped sibling, the convertible range will be available in 420i, 430i and range topping M440i xDrive specifications, with each model featuring engines that integrate BMW TwinPower turbo technology to provide efficiency and seamless power.

The new BMW 4 Series Convertible clearly announces its sporting prowess and the elegance of an open-top four-seater built for driving pleasure. The brand’s new design language has produced a striking interpretation of the low-slung silhouette too.

The new model’s elegant yet commanding presence also stems from its larger exterior dimensions. At 4,768mm, it is 128mm longer than its predecessor, while width has increased by 27mm to 1,852mm and its wheelbase by 41mm to 2,851mm.

Increased track widths (+28mm at the front and +18mm at the rear) accentuate the car’s muscular stature while also enhancing its sharp handling qualities. The front end of the new BMW 4 Series Convertible also highlights its standalone character.

The defining element is its large, vertically emphasised BMW kidney grille, which, as on the new BMW 4 Series Coupé, takes pride of place at the centre of the front end.

The grille has a pronounced forward slant and employs air intakes, with a mesh structure as standard, which indicate the cooling air requirements of the BMW TwinPower turbo engines.

The slim headlights cut deep into the front wheel arches, with full-LED headlight style units. High beam assistant is fitted as standard on the 420i and 430i models, with BMW Laserlight, with adaptive cornering, on the M440i xDrive model.

The dynamically stretched side profile of the 4 Series Convertible helps to give it a low-to-the-road look that exudes sporting flair. The far-back positioning of the seats becomes particularly apparent when the roof is open as well.

When closed, the soft top roof arches over the passenger cell. The precise lines and three-dimensionally sculpted surfaces of the rear wheel arches combine to form powerful shoulders that give the convertible a broad, muscular appearance.

This impression is reinforced by the slim rear light units extending well into the flanks. The lights are stylishly darkened, with their rear bars illuminating uniformly to reproduce the L-shape familiar from other BMW models.

The innovative panel bow soft top of the new BMW 4 Series Convertible marries the strengths of a retractable hardtop and the classic appeal of a fabric roof. It comprises large panel bow elements with a flush-fitting glass rear window.

Several layers of insulation and a fabric cover available in Black as standard, and Anthracite Silver effect, as an option, complete the roof. The acoustic and thermal comfort are superior to a conventional soft top design.

At the same time, it is 40 per cent lighter than the outgoing model’s retractable hardtop. The roof is powered by an electric motor that enables it to open or close within 18 seconds, at the push of a button, including while on the move at speeds up to 50km/h.

The variable soft top compartment allows luggage capacity to be increased from 300 to 385 litres when the roof is closed.