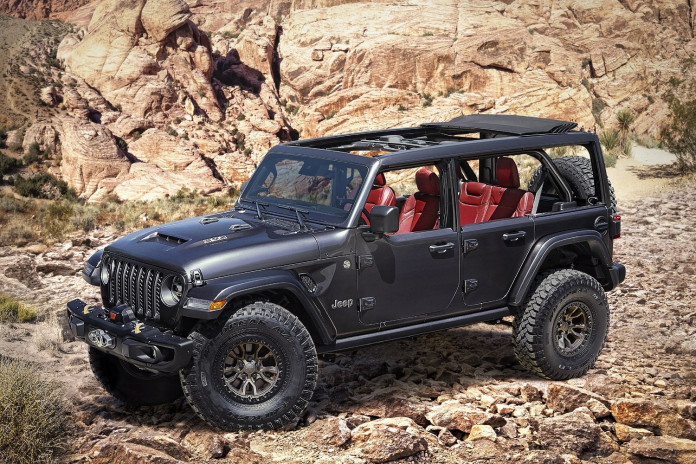 The last time the Wrangler was offered with a V8 engine was in the 1981 Jeep CJ, with its 5.0-litre V8 offering a measly 94kW of power and 298Nm of torque. Jeep enthusiasts have been clamouring for a V8 powered production model ever since.

A two-mode exhaust alters the performance sound at the touch of a button. The concept also boasts custom 17-inch bead-lock wheels that hold tyres to rims under extreme lateral loads, allowing for reduced tire pressure operation and added traction.

Jeep has also thrown a unique, custom design inside and out, with the Wrangler concept featuring a Granite Crystal exterior paint adorned with bronze accentuated tow hooks, badging, springs, shocks and wheels.

It also features a heavy-duty raised performance hood with an aggressive appearance. Custom half doors and Wrangler’s Sky one-touch power top, with removable side panels for complete open-air freedom.

Inside, it features rich Red Rock-coloured leather bolstered seats with gold stitching, along with a performance steering wheel.

If Jeep are listening, we really (really, really) hope they send this monster to production, and bring it to Australia.